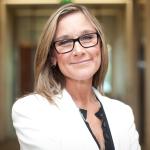 This Woman Makes Twice as Much as Apple’s CEO

One of the best ways to connect with someone is to complain about someone else. Yep, I said it. I do it. (We all do, right?) One social psychologist estimates that more than half of our conversations are about someone else. But before you go down that oh-so-appealing rabbit hole for the zillionth time, consider bonding differently; after all, anyone can grumble, and there’s nothing special about it. If you hate chitchat as much as the next woman, ask some more philosophical or fun questions: Who inspires you? What was the best concert you’ve been to? Would you rather be Megan Markle or Kate Middleton?

If you really want to have a rousing discussion with someone new, ask them why they think so few women are CEOs. Better yet, ask the office dude nearby. His answer might be more enlightened than you think. If he questions you, tell him about this Pew research that says this year, women only make up 4.6 percent of the CEOs of Fortune 500 businesses. Why is that?

There are plenty of reasons women aren’t CEOs. Maybe they don’t want to be, which is cool. Or maybe they’re scared to be, which is sufficiently uncool. Today’s Woman to Watch is Angela Ahrendts, who is the highest paid CEO in the United Kingdom. Her story might encourage you or someone you know to take on a bold leadership position and bid adieu to those ladder-climbing nerves.

You see, tech giant Apple had the position of head of retail open for more than a year—that is, until Angela came on board. She’s responsible for strategy, real estate and development, and operations of both Apple’s physical and online stores. Part of how Angela influences the Apple customer experience is through seamless digital and in-person integration.

In a world where women are so often given a smaller portion of the pot compared to their male colleagues, Angela earns equal in her role, and then some. In fact, she makes more than double that of Tim Cook, Apple’s CEO. Why? Because she’s good. Like, really good.

Angela’s tech journey all started when she took a job at a big corporation. One day, a person in human resources approached her with a recommendation that if she wanted to be “CEO material,” she needed to stop talking with her hands so much. That recommendation went beyond just that sentence, with Angela traveling to visit a coach who would advise and film her on her communication skills.

Angela felt like an imposter in her role at the corporation and wasn't having any of it anymore. So she quit, and a month later, she got a call from the fashion company Burberry. It goes to show that being yourself is often times the best person you can be.

Angela then moved her family to the UK. There, she spent nearly a decade as the CEO of Burberry, where she spearheaded the company’s embrace of ecommerce and in-store technology. She was even awarded Honorary Dame Commander of the British Empire for her contribution to British business.

These days, Angela works hard in Apple’s Silicon Valley office, but she remembers “there are no silver bullets to success.” It takes courage, she says, to be staunch in your beliefs and who you are, because everyone will have a comment along the way.

"No one changes the world who isn't obsessed."