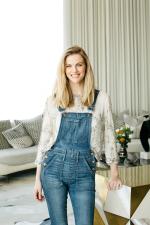 There’s something to be said for accepting what you have in this very moment. As women, we always want more, which can sometimes be a damn good thing; it gets us closer to destroying the wage gap and earning more positions in male-dominated industries. But dealing with what you have right now takes creativity and willpower. There’s always going to be another project or another milestone we want to achieve. Today, use what’s in your arsenal. Pretend Tim Gunn is telling you to make it work. Dream up a new outfit out of your golden wardrobe oldies. DIY a Halloween costume using materials in your basement. Hey, this might just be your newly adopted modus operandi.

Reaching past your style standards and making fashionable combinations is second nature to some and not at all natural to others. We’ve all had that feeling of loathing every piece of clothing we own and hating ourselves in the process: The average woman spends about 2.5 hours each week deciding what the heck to wear.

Today’s Woman to Watch is an actress, model, mother, wife and now, tech startup boss lady. She can rock a makeup-free-and-funny-face selfie one minute, and then glam it up for a magazine cover the next. Her name is the one, the only, Brooklyn Decker.

Brooklyn’s modeling career began when she was scouted at a mall (yep, every 14-year-old girl’s dream). Being a working woman has always been second nature to her, particularly from witnessing her mother work as an ICU nurse. From magazines like Elle, Sports Illustrated and more, Brooklyn made a name for herself quickly before turning to acting.

She first flashed on the screen as an extra on The Devil Wears Prada, and soon after starred in a pilot that didn’t get picked up. Many on-screen projects later, she’s now martini-drinking Mallory in Netflix’s bustout comedy Grace and Frankie. It’s safe to say Brooklyn has come into her own. But, as I said, she wears many hats, including the entrepreneurial one. Now, with two little ones in tow, and with the help of her friend Whitney Casey, Brooklyn has officially launched a patented app called Finery.

Finery is the must-have app of 2018. It’s one of those things that makes you wonder how you survived without it, like those little portable bottles of rosé you can sneak into the movie theater. The app helps you organize your closet, shop for new goodies and find style inspiration all under one virtual roof. It’s a go-to tool that will stop you from purchasing yet another black T-shirt, and alert you when your wish list items hit the sale rack. The inspiration came from the reality that most women impulsively buy clothes that are worn a couple times before being lost in the closet abyss.

Brooklyn, like so many of us, has a love/hate relationship with fashion. Though someone’s gorgeous ensemble will leave her enamored, it’s harder to pull that kind of look together for herself. With Finery, Brooklyn says her goal is to help women prioritize, letting them spend less of their free time deciding what to wear and more time on doing things they actually want to do.

Today, Brooklyn looks back at her life with clarity and feels fortunate for the opportunities she was given. However, Brooklyn says that as an up-and-comer, she regretted some of the choices she made because they didn’t “feel right”—whether it was a photo shoot or an acting gig—but that regret also gives her a little extra wisdom to share with young girls who are pursuing the same dream. She also says one of the hardest things about her workday is trying to juggle it all as a mother and biz owner, but the effort is still rewarding.

Meet Brooklyn at On The Dot’s See It To Be It Success Summit on October 18th, where she’ll be speaking on a panel called “The Unexpected Entrepreneur” alongside Barbecue Wife founder Catherine Stiles and Sheena Paul of World Class. All of these women unexpectedly fell into entrepreneurship and will show you anyone can be an entrepreneur with the right tools. For tickets, click here!