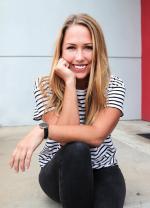 Quit Your Job and Grow Your Instagram Following to 40k

Have you ever thought about grabbing your closest girlfriend for a weekend getaway? Leave the spouse, kids and work demands at home. Traveling doesn’t have to require a minute-by-minute itinerary because, let’s face it, something’s bound to go wrong. The key to a solid vacay either solo or with a bestie is to do it leisurely. A missed train? No big deal, more time to eat croissants in Paris. A walking tour all booked up? Who says you can’t follow the group at an inconspicuous distance and make up the tourist facts as you go? Rent a bike in Copenhagen and pretend you’re a local as you stroll the streets. Rent an Airbnb in a snowy forest and stay in, sipping spiked hot cocoa and watching Home Alone 1, 2 and 3. Let’s put the relaxation back in vacation.

A great time to explore a new place is when you’ve been canned from a job or, even better, when you’ve quit. Many mid or late-career bosses complain that their millennial employees are flaky AF, and they kind of have a point. I mean, according to the New York Post, 43 percent of millennials have a plan, and that plan includes quitting their jobs within the next two years.

Plenty of ladies are hesitant to travel solo. Although there are undoubtedly some lonely moments, using social media is a way to feel a little less alone when you’re wandering. Today’s Woman to Watch, Chelsea Bancroft, has shared her voyage around the world through her Instagram page OneChelOfAnAdventure. She also has a blog of the same name and has garnered a loyal following of people like me that vicariously live through her escapades.

Let’s reverse to where it all began for Chelsea. She followed life’s formula: go to college and get a good job. As Chelsea was working the sales desk at a big tech firm, the corporate environment depleted her a little more each day. We’ve all been there, right? The difference is that Chelsea did something about it, something that many of us would only dream of: She quit her job, booked a one-way ticket to Australia and off she went.

As she adjusted to her new life down under, Chelsea worked as an au pair for a year and blogged about her trips. Her content resonated with many an unhappy millennial, and Chelsea became an iconic figure that represented following your bliss. With a cool 40k followers on the ‘gram, Chelsea’s clearly doing something that genuinely connects with people.

Now that Chelsea’s back in the states, she has used what started as a fun way to document her life into a skill set worthy of companies. She’s the go-to gal for strategic partnerships and social media at Roger Beasley Mazda, and she consults other clients, as well.

If you’re looking to boost your Instagram following through a little travel of your own, consider some tips from Chelsea. Perhaps the top tip is to spend time on your hashtag game, which is the key to garnering recognition. It’s also just fun to peruse people’s ventures by clicking on optimal hashtags used for travel, like #girlslovetravel, #morningslikethese and #fromwhereistand.

At On The Dot‘s recent Success Summit, Chelsea said something that stuck with me. She talked about how her job didn't make her feel important. She wasn’t looking for Academy Award-level importance; she just wanted to be appreciated, spend her days working on something that was impactful and that helped out in way that felt worthwhile to her. We feel ya, girl.

"Even when you think your life is over, a new story line appears."