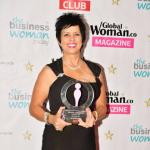 One in Eight Women Will Develop this Disease

When Veep star Julia Louis-Dreyfus was diagnosed with breast cancer, she chose to share her diagnosis with the world in a single tweet. She’s since shared social media posts about her recovery, exuding a “carpe diem” mentality with a healthy dose of sass and F-bombs. Everyone’s journey with disease is different; While some may instinctually put on their boxing gloves and get ready to fight, others may resolve more quietly to get through it day by day. Regardless of one’s outlook, there’s something every person fighting a tough battle needs: support.

In Julia’s tweet, she mentioned a hard-to-swallow fact about breast cancer: about one in eight American women will develop it at some point in her lifetime. Chances are you know someone, or will know someone, who will develop this life-threatening disease, so be sure to do a breast self-exam monthly and talk to your doctor about the risks associated with the disease.

Our dynamic Woman to Watch, Cherie Mathews, is one woman that developed breast cancer. Cherie was diagnosed nearly two decades ago. A computer engineer who’s worked on projects for IBM and NASA, Cherie is a go-getter. Following a double mastectomy, Cherie discovered something else: a serious lack in post-op support. Those who endure a mastectomy can feel disoriented and stressed, and what they need most afterwards is comfort and care.

After both her breasts were removed, Cherie was instructed to wear her husband’s button-down shirt, an upsetting suggestion for a woman going through such a physical and emotional change. As Cherie recounts, if a sprained elbow is treated with a sling, then why don’t women receive appropriate clothing following surgery? That’s when she thought of the idea for HealInComfort. Though she didn’t have a speck of startup experience and failed home economics because she stapled her palazzo pants, this fighter had the guts to get going.

Cherie set out to engineer a post-op shirt that allows women to feel human after such a traumatic surgery, and thus, HealInComfort was born. The shirt she designed is specifically for post-op, whether it’s a lumpectomy, reconstructive surgery or mastectomy. The shirt’s velcro fasteners help women feel independent when their movement is restricted, and moisture-management material feels soft, loose and comfortable. The best thing about the shirt, though? The internal pockets that hide and secure drains. As Cherie says, you shouldn’t have to feel like a science experiment in recovery.

Cherie now has two patents and five trademarks for her recovery shirt. This failed home economics student credits watching Coco Chanel videos—more specifically, Coco’s unwavering focus on finding the right fabric—to ensuring that the HealInComfort shirt would be the very best. It took Cherie nearly a year to find the right fabric, but it was all worth it: the 19,000 and counting patients her shirt has helped are proof of that. She was able to do all of this without a single dime spent on marketing!

HealInComfort also offers T-shirts with spirited drawings and phrases like, “Hey! I kicked cancer’s butt!” There’s no better way to say “I’m here for you” than gifting someone with a HealInComfort shirt to remind her that she’s got this! The shirt is about the same price as flowers, but will bring an unmatched level of comfort to the patient.

Aside from the 17-hour days Cherie put into her biz and her own personal experience, what makes Cherie an entrepreneur to admire is her effervescence and fortitude. Cherie was awarded the Global Woman Inspirational Award in July 2018 in recognition of her contribution to not only giving women a comfortable chance, but also for giving them a reason to feel fierce, beautiful and brave.

Cherie’s dream is that the HealInComfort shirt will become required post-operative equipment for every person undergoing this life-altering surgery.

“She was unstoppable, not because she did not have failures or doubts, but because she continued on despite them.”