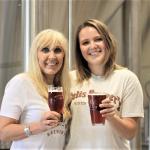 Bringing Back the Family Business

There’s an OBGYN who coined the term “hurried woman syndrome,” and chances are you’ve got it, girl. Ask yourselves these questions to find out for sure: Are you stressed out most of the time? Do you feel like you’re always on the go? Do you feel like you can’t catch a minute of “me time?” Do you have an infinite to-do list? Ding, ding, ding! You aced the not-so-cool quiz. One of my friends said that sometimes, you just have to accept the status quo and move forward. What’s something you could let go of today to carve out a solid 15 minutes of chill time?

I’ve heard one of the best ways to slow down is to make a cup of tea and sit with it. No distractions, just mindful drinking. What’s the next best thing after tea? A pint of beer, which 6 percent of Americans drink every single day. The days of chugging Natty Lights might be over for you, making it a great time to sip and savor one of the world’s oldest drinks. If you’re with friends, download a free tasting sheet and sound like an expert drinker with comments like “a bready finish” and “harsh pine.”

WOMEN TO WATCH: Christine Celis and Daytona Camps, Owner and Brewer at Celis

Two women who know an IPA from a hefeweizen are today’s Women to Watch, Christine Celis and Daytona Camps. Christine’s father, Pierre, relocated from Belgium to the United States to start a brewery in the early 90s. He smuggled his original yeast strain in his tube socks. Yep, coolest dad ever, right? This stuff was important, y’all. After all, it’s what defined Pierre’s signature Belgian-style Wit beer for 30 years.

His sneaky socks helped establish Celis Brewery as a well-loved institution, which is quickly climbing to the fastest-growing craft brewery in the country. After nearly a decade, Pierre begrudgingly sold the brewery to a mainstream company. Nearly twenty years later, Christine has teamed up with her daughter Daytona to open up the brewery again, in Pierre’s honor.

For Christine and Daytona, legacy is what it’s all about. Daytona brings her brewing knowledge from another brewery, so clearly, beer runs through the family lineage. Christine remembers playing in spent grain instead of a sandbox and rollerskating under the bottling line.

Christine and Daytona faced some serious struggles to get back the Celis Brewery. That big brand that bought it from Pierre retained the rights to the brand. Beer brewing requires patience, and Christine definitely has that. It took her 17 years to get back the name. The process, Christine said, is a testament to fighting little by little to get what you want.

Now, the beer-drinking and beer-making women are ecstatic to reintroduce a whole new generation to their famous wheat beer, Celis White, along with others like Pale Bock and Grand Cru. What I appreciate about Christine and Daytona’s approach is they assume you want to learn about what you’re drinking. They don’t take the customer as a fool who will just drink anything. You get the facts about your drink, like color and aroma and taste, so you can judge it for yourself.

Oh yeah, remember that smuggled yeast? A university in Belgium has preserved it and this mother-daughter duo still ships it in. I’m sure Pierre would be proud. With Pierre’s recipes in tow, Christine and Daytona are continuing the conversations that Pierre helped start so long ago, and bringing back the art of the family business all over a couple glasses of Celis White.

Many of us would have given up after five years, 10 years, heck, even 15 years of trying to get one thing accomplished. Isn’t Christine Celis’s determination proof to keep trying? Here’s another strong woman to send you off. Sonia Sotomayor said:

"A surplus of effort could overcome a deficit of confidence."