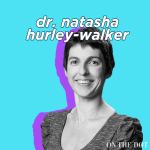 Let’s talk about the moon: Is it made of cheese? I don’t think so. Does it impact our mood? Maybe. When someone’s acting like a damn fool, people often say, “It must be a full moon!” Is it just weird hullabaloo?

Most studies suggest no correlation between the lunar cycle and mood changes, but what is well documented is how the moon affects animals. Lions are less likely to hunt during a full moon because, obviously, it’s brighter at night. So maybe those menstrual cycle mood swings are directed by Sister Moon, or maybe it’s why you’re dealing with raging cramps in the workplace. Do you believe the moon influences your behavior?

Brené Brown discusses how quantitative research has always been the most well regarded, and rightfully so. Scientists can measure all kinds of things, and verify them, too. But, she also explains that qualitative research - like storytelling - deserves some attention, too. Let’s look at the quantitative: Everyone has DNA in their bodies, and if you unraveled all of your DNA, it would span 34 billion miles. (Whoa). Now, let’s take a jab at the qualitative: Are those 34 billion miles what makes your in-laws so coocoo? You tell me.

Over the course of human existence, we’ve made up all kinds of stories about what we didn’t understand - like werewolves howling under the moonlight, and the Earth being as flat as a crepe. We live and learn, and fortunately, we share our insight with others. Dr. Natasha Hurley-Walker is an award-winning astronomer that does just that.

Natasha works at the International Centre for Radio Astronomy Research in Perth, Australia. Her mantra is: “It’s human nature to explore.” That’s what she did at the University of Cambridge in 2010, where she earned her PhD, and she’s still on an endless quest to see what’s often unseen. Natasha headed to Australia to help commission a telescope, and has even made a TED talk discussing what’s called a radio telescope.

Is that a telescope that plays the top 40 hits? No, unfortunately. But it does something pretty cool. It helps you see without light using radio waves. Remember what I said about lions and the moon? Light is pretty dang significant. Put simply, Natasha works to see that stuff in our universe that’s far, far away.

Natasha has been called the 2019–2020 Superstar of STEM. With Natasha, the sky isn’t the limit; it’s just the beginning. As she and her colleagues work on exploring new technology using these radio waves, Natasha hopes to make a map of the universe, regardless of supermassive black holes that might get in the way.

While scientific inquiry is crucial to understanding our world better, sharing that knowledge is also vital. That’s what makes Natasha so unique; she’s a natural born communicator and advocate. Natasha isn’t afraid to share the anxious moments of being a scientist who, you know, has a life outside of her work. She’s super relatable, too! She once tweeted about submitting a paper just before her son’s daycare called, asking her to pick him up.

One way she’s doing outreach and sharing the information she learns? Through an app, of course. It’s called GLEAMscope, and with it, you can grab your Samsung Galaxy and see the universe in radio waves. Happy exploring.

"Happiness is the gradual realization of a worthy ideal or goal."