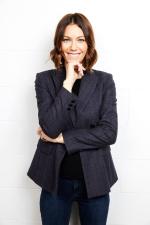 What You Don’t Know About CBD

I met a woman this weekend whose preschooler has serious medical issues. One of those is seizures. The woman cautiously shared her story with me: about how her son has been able to transition off his medications, which had terrible side effects. The reason he was able to? CBD.

It wasn’t until last year that the FDA approved a particular CBD for treatment of seizures and, from all accounts, it’s made a seriously positive impact on the lives of kids and their caregivers. Remember, cannabis is generally known for two categories: CBD and THC. CBD differs from THC, the substance in cannabis that - put simply - turns you into Snoop Dogg and gets you high. CBD, on the other hand, isn’t psychoactive and is now about as prevalent as Sriracha.

WOMEN IN NUMBERS: Half

The mom I spoke with talked about how, like anything, CBD isn’t something you can start and immediately forgo your meds. Consult a professional before deciding you don’t need a medication that’s been helping you. That said, it’s reported that nearly half of people who use CBD stop taking their traditional meds.

The marijuana and CBD industries have felt a little, well, masculine. If you visit a legal dispensary, you’re often met with what feels like a 15-year-old boy’s design sense and proclivity for Mountain Dew. There’s a stigma around the CBD industry, particularly for women, so that’s why it’s cool to highlight a woman who is bringing CBD out of the musty basement bedroom.

That woman is Kerrigan Behrens, co-founder of Sagely Naturals. Over the last three years, Kerrigan and her co-founder, Kaley, have developed a cannabis and wellness brand based in Los Angeles.

Kerrigan began using CBD for her chronic back pain. It worked wonders, turning once debilitating agony into something more manageable. She started her career on Wall Street, eventually becoming the director at a financial institution called UBS. (Who knew her professional ventures would all center on acronyms?)

Now, Kerrigan is one of the leading female pioneers in the CBD industry. There’s a heck of a lot of nuance when it comes to CBD, especially for all the newbies out there. Sagely Naturals uses organic, non-GMO hemp and tests every batch thrice over. Their labs are GMP-certified, and their products don’t contain synthetic fragrances, parabens or any other junk we wouldn’t want.

Just because you enjoy using CBD, doesn’t mean you know how to produce it. Kerrigan hired chemists to create Sagely’s products. Items like CBD roll-ons provide relief and recovery with cooling essential oils, while body oils help you drift off to sleep in no time.

Kerrigan has been called a “destigmatizer,” and in a tongue-in-cheek kind of way, she insists that putting a picture of Bob Marley on a product—with all respect—reinforces the stereotype of who might use the product. She admits this is why Sagely stands out: Its crisp, minimalist packaging and welcoming website make women feel less like fish out of water.

Sagely has been bootstrapped from the get-go. Kerrigan didn’t hire an employee until a couple years in, and she didn’t take a salary either. She admits she and Kaley didn’t ask for outside help, in part, because they thought the business needed to be a big success first.

It’s been a learning experience, but one that’s a little more chill than others. It turned out investing her savings into her own business was one of Kerrigan’s smartest moves.

Ayn Rand believed in drug decriminalization, though she hated the stuff. We all have our opinions, don’t we? She said:

"The question isn't who's going to let me; it's who is going to stop me."