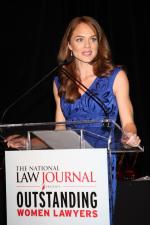 Let Me Tell You Why You’re Enough

There are times when almost enough is detrimental to you. Take these instances: having almost enough hair dye for your locks (being spotted like a cheetah is cool, right?), almost enough yeast for your focaccia (I like my sandwich heavy), or almost enough gas in the tank to make it (I’ve got a perfect thumb for hitch-hiking). I’ve been thinking about the idea that you have to show people how they ought to treat you. If I think I’m almost enough, but not quite, what am I telling my boyfriend or my client or that haggler at the garage sale? I’m saying, “Hey! If you need a door mat, here I am! If you need someone to take advantage of, sign me up!” Enough’s enough: You are enough.

Sometimes I feel like society throws us ladies a bone and wants us to be satisfied. But the bone is like, wishbone-sized, and all of us have to share it equally. Take, for instance, this little fact: When it comes to mainstream media, women hold only 3 percent of positions that have influence. That means John, Ron and Don are determining what comes up in our feed and on our home screens, which then trickles down into the content we see and the voices we hear. That ain’t a bone to write home about.

What’s the solution to this lackluster stat? Today’s Woman to Watch, Marjorie Clifton, has some ideas. As a strategic consultant, she’s worked the last couple of decades to build coalitions and campaigns that reinforce her passion for helping women bust down workforce barriers. Part of what this means is Marjorie isn’t afraid to ruffle some feathers to get stuff done.

Her client list is straight-up unreal and includes organizations like the American Medical Association and U.S. Department of State. You may also recognize her from appearances on PBS and NBC as a media commentator. She also runs a coalition to protect consumers from illegitimate medications on the web, and she’s a fellow at the Annette Strauss Institute for Civic Life. Marjorie. Is. Busy.

That’s why it’s pretty mind-blowing that there’s even more on her schedule. She’s part of a few empowering programs for women, like the nonprofit Running Start. Marjorie began another nonprofit called Community in Her Corner, as well, which provides professional development for women. And another program, called Next Step, trains women in politics and career development in their twenties. (Hey, millennials, we’re looking at you!)

From spitballing about racism in governor races to whether or not NFL players should take a knee, Marjorie has made a career out of taking a public stance. As her own boss, Marjorie urges other one-woman shows to view their careers or startups as personal revolutions. It’s a way to stay true to your values, so at the end of the day, you can be proud of the work you’ve done.

Marjorie has had her fair share of pushback as a woman in media. Spitting out political opinions in front of a camera elicits plenty of hate mail (or, rather, tweets). While the haters are most certainly going to hate, you don’t have to hate. Marjorie gives some much-needed advice on how to deal with a person who takes advantage of you, something many of us have experienced and will continue to experience.

While being a skeptic has its perks, she recommends giving people the benefit of the doubt, while also taking a breath. Literally. Take the high road even when you want to punch the jerk taking advantage of you, then consider the long-term impact of your reaction. Is the bridge worth burning?

“Maybe my best isn't as good as someone else's, but for a lot of people, my best is enough. Most importantly, for me it's enough.”

Meet Marjorie at On The Dot’s See It To Be It Success Summit on Thursday, October 18th, where she’ll be speaking on a panel called “Better Together: A Discussion of Diversity, Inclusion and Civility” alongside Deloitte’s China Widener and RetailMeNot’s Sharon Brogdon. For tickets to the event, please click here!