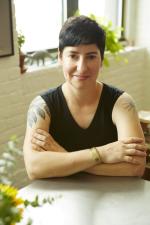 The Making of an LGBT-preneur

FIRST THOUGHT: The Most Incredible Gift

I read a quote the other day that got me thinking about love. It was something actress Ellen Page said during a Human Rights Campaign speech nearly four years ago about how loving someone is “the most incredible gift,” and that we all deserve that gift. It was also the first time she publicly announced that she’s gay. When singer-songwriters and Hallmark alike moan on about love, they always make it seem so complicated. Maybe it isn’t. Maybe we just keeping letting others tell us what it’s supposed to be.

People sure do enjoy telling others what to do, but people don’t necessarily like being told what to do. When it comes to love, the LGBT community consistently faces discrimination, from the coffee shop to the work place and even in their own homes. According to a 2017 Out and Equal study, 1 in 4 LGBT employees reported experiencing employment discrimination in the past five years. The keyword here is “report,” meaning the actual number of LGBT employees discriminated against is likely to be higher.

Real talk: It’s pretty difficult to love someone else when you don’t love yourself. Let’s celebrate some self-love with someone we love, today’s Woman to Watch, Rachel Winard. The owner of Soapwalla Kitchen, Rachel is also a part of the LGBTQ community and fosters an environment of acceptance. About half her employees identify as queer and all of them are making strides to better customers’ self-care regimens.

Like her company’s delicious soaps, Rachel’s a delightful fusion. She attended Julliard to pursue a career as a violinist after learning how to play at the age of 4. When the music thing didn’t feel quite right, Rachel pursued law school. She wasn’t even a year in before falling gravely ill, and not long after that, doctors diagnosed her with lupus.

Though Rachel finished law school and worked at a big firm for several years, the stress of her full-time gig did more harm than good for her fragile immune system. So, she had to call it quits, which was tough for an intellectual like Rachel, especially since she struggled immediately after she quit. But she knew she certainly had more to give to the world.

Being diagnosed with a chronic autoimmune disorder can wreck your mental, emotional and physical well-being. When Rachel’s lupus was at its worst, her skin would become irritated with something as simple as water. Thus, the creation of some seriously mellow skin-care began. This positive pioneer set out to use simple ingredients for a variety of skin types and concerns since chemical-laden skin care just wasn’t cutting it.

It took Rachel several years to sell her product line, but her friends and family helped motivate her. With that support and encouragement, Rachel launched her first two products—a soap bar and a face serum—which she still uses daily.

If you like easy-to-understand ingredient lists, minimalist packaging and straightforward products, Soapwalla’s your jam. The company is based on the principle that your health matters, inside and out. There’s a lovely collection of vegan soap bars calling our name, with scents like cardamom ginger and lemongrass and green tea. (Yum.) Sure, you could gift these products to someone you love, but it doesn’t hurt to give yourself a gift sometimes, right?

Rachel says there still aren’t many people like her represented in the skin-care industry. Hopefully, telling her story will pave the way for other LGBTQ entrepreneurs looking to make a difference.

Growing your business can be tough: it requires dedication and a mindful morning routine. Finally, your message should be moderate and never alienate anyone. Check out our three tips on how to craft a nonpolitical, streamlined business plan by clicking here or, if you’re listening via podcast, head over to OnTheDotWoman.com!

Rhonda Rousey, a fighter in and out of the ring, said it best: