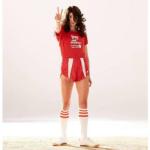 Running is one of those things that seems too hard to do. I always joke that I run…when someone’s chasing me. But I know plenty of women who have discovered they have a passion for the activity, so here are some tips if you want to be one of those women. (I’ll cheer you on from the sidelines!)

Get a partner, a neighbor, a frenemy, a colleague, anyone. Unless you have steel willpower, this will help you get off your butt. Next, start walking often, increasing your speed and duration. Sign up for a Thanksgiving 5K. Then, start inserting some light jogging; for every minute you jog, walk two. The most important tip? Figure out your “why.” Write it down. Look at it every time you want to bail.

Your goal might be a triathlon, or your goal might be running around your neighborhood. Goals, both big and small, are good for your well being. If you’re more of an aim-for-the-stars kind of gal, you’ll love this little fact: They say that if you want to live longer (sure, why not), consider running about 20 miles a week. Time to lace up, y’all. Don’t forget to warm up those joints to prevent injuries, and remember that stretching mid-run can be a good call.

Some runners’ goals are simply to build endurance. (After all, that’s a key skill to have if and when the zombie apocalypse happens). Alexi Pappas would certainly be my choice to lead the resistance, and here’s why.

This Greek-american went to Dartmouth and the University of Oregon. She earned All-american honors in long distances, making her the perfect candidate to participate in the Olympics.

So, that’s what she did. Alexi was a 2016 Olympian. Some of her most interesting insights from the games aren’t even from the track, but from living at the Olympic Village. She says morning walks of shame ran aplenty, as were pool parties.

Alexi is also the first professional runner to be sponsored by the popular sportswear brand Champion. Alexi says she started running in middle school, but she didn’t fancy it until college. What drew her to it was the flexibility; it’s something you can “take with you” around the world.

What’s unique about Alexi isn’t just her stamina or endurance; it’s all the other aspects that make up her dynamic personality. Alexi’s a writer and actress, too. This year, she co-created a film that debuted at SXSW, in which she starred alongside actor Nick Kroll. A couple years ago, she helped write and direct another film about running, this time starring with Rachel Dratch.

When Alexi reflects on her time as a professional runner, one thing sticks out. While running is a solo event, there are times when teammates make you better. In the case for Alexi, she says her Oregon teammate, Jordan Hasay, improved her races. By admitting to your friend, your teammate, your fellow actor that something’s rough - that you need support - you’re strengthening the camaraderie. Take Alexi’s advice: Vulnerability isn’t weakness.

There are plenty of great quotes by Alexi Pappas, but here’s just one:

"I think it takes hanging in there and staying on your own team. That means figuring out the good things that come out of the change in the plan, whatever it is."