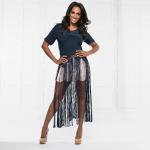 I heard once that the older someone gets, the less they know. That’s because the wiser we get, the more we realize just how much we have to learn. For example, there’s a lot of stuff floating around the Internet about the big C word: cancer. Let’s clear some of it up. According to cancer.gov, there’s no research to back up the claim that sugar and artificial sweeteners cause cancer. From what we know, cell phones don’t cause it either, since their low-frequency energy doesn’t damage genes, to our knowledge. Just because no one in your family has had cancer (by the way, lucky you) doesn’t mean you’re risk-free. But don’t just take my word for it or the word of that wellness Instagrammer you follow. Do your own research and share your findings.

I’d venture to say that nearly all of us know of someone who has been affected by cancer, a disease that causes abnormal cells to divide and destroy tissue. This year, it’s estimated that almost 2 million new cases of cancer will be diagnosed in the United States alone. Though cancer’s origins are still so much of a mystery, what we do know is that carcinogens in chemicals have an impact, as well as genetics, age, tobacco, bacteria and viruses, and UV radiation.

When a kid gets cancer, we’re often ecstatic if he or she goes into remission, and dangit, we should be! One of the things I never realized until I met someone with childhood leukemia is that cancer is something that will affect a kid’s life forever. From difficulty gaining weight to an increased likelihood of developing other forms of cancer later down the line, sick kiddos have a bigger, scarier future than we realize. That’s why women like our Woman to Watch today, Chandini Portteus, are so significant.

Chandini Portteus is a high profile CEO turned entrepreneur and is currently principle and founder of Portteus Consulting Group. She has served as prior CEO of Wipe Out Kids' Cancer AND Livestrong, and has spent a decade at Susan G. Koman as Chief Mission Officer.

Part of what Chandini was in charge of at Wipe Out Kids’ Cancer was increasing funding for and donations towards pediatric cancer research so more programming and care could be implemented. About half a year into the job, she doubled the organization’s annual revenue.

The organization has been a Dallas mainstay since 1980, and one of its programs is the Ambassador Family Program where, simply put, kids can just be kids. A few hours each month, kids can attend a hockey game or have a dance party.

Another smart program the organization has is the Buddy Bag: Thirty toiletries and comfort items are collected and given to a family whose child recently received a cancer diagnosis, because when those children are immediately admitted to a hospital, families are left frazzled and concerned.

What I appreciate about Chandini is that the girl ain’t afraid to say what she does well. She advocates for others and also herself, noting how she strives to foster authentic relationships and is seasoned in conflict resolution. Chandini’s strengths appear to be developing a community with high morale, something that’s surely appreciated when in fulfilling, yet heartbreaking, line of work.

"Always aim high, work hard, and care deeply about what you believe in. And, when you stumble, keep faith. And, when you're knocked down, get right back up and never listen to anyone who says you can't or shouldn't go on."