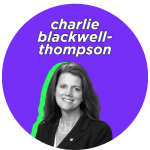 FIRST THOUGHT: Women can countdown, too

Have you ever been around someone who Won’t. Shut. Up. You know, someone who thinks being the biggest, best person in the room means she has to fill the airwaves with her voice at nauseum. That rarely works outside of the playground, am I right? Here’s the thing: there’s power in quiet, in not filling up every second. Think about it, the best speakers in the world always have dramatic pauses. Even space—that huge thing that’s so powerful and elusive—is completely silent. Remember, Jupiter doesn’t have to say anything for us to know it’s the biggest planet in the solar system.

Little girls and little boys dream of exploring the stars and the planets and everything in between. In 1983, Sally Ride became the first female in space and since then, NASA has seen tremendous gender representation. NASA says that the first person on Mars will most likely be a woman, and, like, how cool would that be? Thirty-four percent of active astronauts are women, so shoot for the stars, ladies. Literally.

We all know that no man, woman, or dog could make it to space without some serious backup here on Earth. The idea of managing what’s going on up there stresses me out but fortunately, it’s the kind of thing Charlie Blackwell-Thompson lives for. Without her leadership, space exploration would be less successful. Plain and simple.

Charlie is NASA’s first female launch director. The position is all about leading and managing launch operations. I assume like every other job, it’s a lot of meetings, paperwork and preparation.

Part of being a launch director is being emotionally intelligent. She must convey calmness to her launch team because, let’s face it, working for someone who is stressed the F out doesn’t solicit solid results. Charlie acts as the final decision-maker before boosters ignite and space shuttle engines lift off.

Charlie will be overseeing NASA’s Space Launch System rocket and Orion spacecraft during the first flight test. It’s the world’s most powerful rocket, aimed to go to Mars. Called Exploration Mission-1, it’s a lot to put on one woman’s shoulders. Charlie draws from her experience as a seasoned spaceflight engineer.

One of the things Charlie said struck me. She said that while deep space exploration is a thrilling idea, we can’t do it without the initial steps. Mars might still be years away, but as Charlie puts it, you can’t get there without the first steps. She also mentions that while being the “first” to do anything can be thrilling, it almost always comes with surprise challenges. That’s the fun of it, though.