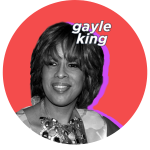 Connection has the power to empower. Whether you live in Maryland or Mexico or Monaco, by using our voices to both expose injustices and lift one another up, we are connected. We are all in this together. After all, empowered women empower women.

One way to make that connection is through sharing and informing others through social media, publications, or even the TV screen. According to the Pew Research Center, from 2014 to 2015, newsroom jobs filled by African-Americans stayed at about 5 percent.

Following an analysis of race relations in the late ‘60s, the government invested in programs to recruit African-American students into journalism. So what gives? I don’t have the solution, but I do know one thing: It’s crucial to share the stories of those in that 5 percent to inspire future journalists.

One of the women who have long inspired us to share women’s stories is the one-and-only Gayle King. Yes, the Gayle King. She’s the real-life equivalent of Mary Tyler Moore, so you know I love her, ya’ll!

Chances are you LOLed at Gayle’s wicked sense of humor during her 2006 cross-country road trip with bestie Oprah Winfrey. Maybe you’ve seen her discuss international news stories and interview change-makers, like Dolly Parton and President Obama, on CBS This Morning.

After Gayle graduated with a degree in psychology, this luminous lady headed to my hometown of Kansas City, Missouri for her first reporter and weekend anchor gig. She made the move from KC to other TV stations in Baltimore and D.C., before killin’ it for 18 years as a TV news anchor in Hartford, Connecticut.

As the editor-at-large for O, The Oprah Winfrey Magazine, Gayle has been instrumental in turning the publication into a staple in women’s homes since 1999. In 2006, Gayle launched her award-winning radio show on XM Satellite Radio, and since 2012, she’s co-hosted CBS This Morning, where she negotiated a long-term deal and was promoted earlier this year. She recently interviewed rapper R. Kelly regarding the allegations he’d sexually abused women.

It’s no surprise that Gayle’s dedication, insight and humor has led to winning numerous awards, including three Emmys. Gayle took a risk when she declined Oprah’s offer to “pass the baton” of the Oprah Winfrey Show. She’d have to move to Chicago with her two children and away from their father, a connection that her kiddos needed.

One reason so many are drawn to Gayle’s infectious reporting and storytelling is her uncanny ability to remain vulnerable. In an issue of O, Gayle candidly shares her aha! moment, when she realizes her children don’t know much about her late mother. Her candor has a way of drawing women in, helping them feel connected - even if it’s through a TV screen.

Another reason Gayle slays? She celebrates other women’s intelligence and success, knowing that it doesn’t diminish her own. Some of her favorite accomplished gals include Maureen Dowd at The New York Times, “30 Rock’s” Tina Fey, and the one-and-only Alicia Keys.

Thank you, Gayle, for shining light on the beauty of connection and following your dreams.

"Think like a queen. A queen is not afraid to fail. Failure is another stepping stone to greatness."

March 18 Andrea Savage:
She’s the Funniest and Most Bold Woman on TV
July 10 Kerry Diamond and Claudia Wu:
Be the Bombe in the Kitchen
May 15 Henriette Kolb: She’s Banking on Equality
March 17 Melissa Proctor: She's in a League of Her Own
April 17 Jane Goodall:
'The Woman Who Redefined Mankind'
March 31 Geri Stengel: She’s Venturing into Entrepreneurship
Home Woman to Watch Articles Videos About