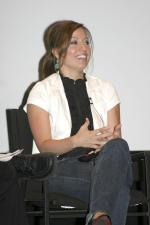 The Woman Who Brought You "Pitch Perfect"

In 1958, a then-unknown dude named Hunter S. Thompson wrote a cover letter of sorts to the Vancouver Sun. No one would dare send such an entitled, ballsy cover letter today, riddled with curse words and big, bold opinions. The Sun’s editors didn’t find Hunter’s arrogance appealing, and he’d later be fired from a couple other newspaper jobs. (Something about a candy machine and insubordination). But now, well, now he’s the famous writer of Fear and Loathing in Las Vegas and other books.

Why am I telling you this story? Because maybe we should take Hunter’s lead and just put ourselves out there. Our real selves. We might not get a call back; we might get fired; but at least we can rest easy knowing we did what we wanted.

We talk a lot about finding your voice and using it, but honestly, you already have your voice. It’s not lost. You’ve got it. So, use it. In the Pitch Perfect franchise that was created from a book by the same name, college girls literally use their voices in an all-girl a capella group. Each woman brings their own unique sound and personality to a group with awkward, comical, beautiful results. The movie series made a whopping $115 million across the world.

Anyone can be themselves by themselves, but what about with a group of other people who are also completely themselves? There will be conflict. There will be miscommunication. There will be meals stolen from the breakroom fridge. But magic can happen from unlikely cohorts, and Kay Cannon knows a little something about that.

Kay is the screenwriter and producer behind some big-time shows and films. I’m talking about that little franchise I just mentioned—Pitch Perfect—and one of my personal favorites, NBC’s “30 Rock.” One of Kay’s most recent shows, ”Girlboss”, was on Netflix.

Her rise to writing and producing fame didn’t come out of nowhere. Kay grew up in Illinois with a half-dozen siblings, earning her bachelor’s in theater, and then her master’s in education. She trained at all the go-to spots for smart and funny women, like The Second City.

While in Chicago, Kay became friends with Tina Fey. (Who?) It was this Tina lady who, impressed by Kay’s writing and friendship, took her on as a staff writer for “30 Rock.”

Since then, Kay has been proving herself time and time again. Last year, Kay made her directorial debut with a movie called Blockers. The cinematic tale of teenage girls trying to come into their own is unlike what’s been done before. And, as Kay says, there might be lots of classic puking at high school parties in this feminist comedy, but it’s “empowered” puking.

During her time as the showrunner on the “Girlboss” set, Kay hit it off with a producer. The dynamic female duo has now formed their own biz called K&L Productions, which has landed its first-look deal with Sony TV.

What’s clear about Kay’s career is that she isn’t afraid to focus on what she cares about: telling women’s stories in the funniest way possible. Her own story demonstrates that actually giving a hoot about the women you meet and work with will help you along the way. No job or purpose in life is isolated; we all need each other.

"Love yourself first, and everything else falls into line. You really have to love yourself to get anything done in this world."