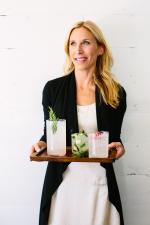 To Succeed in Business, Make Your Message Emotional

FIRST THOUGHT: Is it Luck or Hard Work?

There’s this misconception that success just happens. I mean, sure, serendipitous things do happen, but here’s the cold, hard truth: Many of us won’t encounter some magical career moment where a stranger at a cocktail party offers us our dream job, or some celebrity endorses us on Instagram. For most everyday people, we have to set ourselves up for success, the same way we rack up student loans for a degree, or force ourselves to go to a networking event even when we feel like having a date with Netflix. The path of persistence has its own kind of magic; it’s the magic that we can make it on our own if we just listen to our intuition and show up.

A lot of the time, kismet happens when we RSVP to a backyard BBQ or brunch with the girls. With a drink in hand, we make connections with that unlikely neighbor, or strike up a money-making idea with our best friend. Or, we might just come up with that next big thing solo, with a glass of Cabernet on the couch. We like numbers here at On The Dot, and one statistic in particular sounds, well, delicious: In 2016, the amount of alcoholic beverages sold in the U.S. amounted to $223.2 billion.

Today’s Woman to Watch, Kelly Gasink, knows a thing or two about alcoholic beverages. She also has a resume built for a business owner, with a degree in economics from Stanford University and a degree in public policy from the Harvard University Kennedy School of Government. Then, there are the tech companies she launched. She did all of this, I assume, with a mojito in hand. Eventually, Kelly became influenced by her family, and her grandfather’s penchant for “Cocktail Time” inspired her to launch Austin Cocktails with her sister in Texas.

As per tradition, Kelly’s grandpa would serve the kiddos in the family Shirley Temples and cocktails to the adults. This sweet and stiff memory inspired Kelly to create a line of drinks concocted from spirits and herbs. We’re not talking the malt beverage of your college days; Using ingredients like organic agave nectar, coconut water, aromatic fruits and herbaceous blends, Austin Cocktails brings craft refreshments to your home. Each bottled cocktail exudes a sense of balance and subtlety.

For Kelly, cocktail time isn’t just about the beverage; it’s about the moments such a drink can make. Drinks can connect lovers and friends, neighbors and colleagues. Kelly believes the strongest consumer brands are the ones that connect with people on a deeply emotional level, and in a world where depression and loneliness is rampant, she aims to create a space of joy and connection with these fiery drinks.

Launching a liquor business as a woman brought plenty of disbelief: Some people questioned whether the biz would really be a full-time gig. Kelly mentions she has no doubt that the same queries wouldn’t occur if two dudes ran the business. But as daughters of a former hedge fund trader, she and her sister have business chops in their blood. That kind of business and money know-how was crucial to launching their brand, as it required some personal funding before they could gain capital.

Kelly combats wasting time and making every day work by saying “no” as much as possible to the things that don’t serve her priorities as a business owner and mother of two. As Kelly says, it takes “rigorous discipline” to accomplish such balance.

One of the biggest lessons she’s learned is you can try to have it all mapped out, but new roads will pop up, u-turns will be necessary and you can bet there will be plenty of dead ends. Another huge lesson she learned was to be brave; she advises millennials to be OK with looking rejection in the face and behave in different ways to get the outcome they want in their professional lives.

If you need a reason to take your idea to the next level, listen up to what entrepreneur Farrah Gray said:

"Build your own dreams, or someone else will hire you to build theirs."

Meet Kelly at On The Dot’s See It To Be It Success Summit on Thursday, October 18th, where she’ll be speaking on a panel called “Girls Just Wanna Have Funds: Whether Raising Money or Looking to Invest, Why It’s Imperative Women Get in the Game,” alongside entrepreneur Kelsey August and Finery’s Whitney Casey. For tickets to the event, click here!