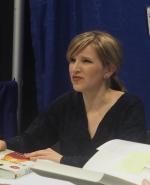 The idea of secret societies always appealed to me. I blame Gilmore Girls, when Rory gets scooped up into one. It seemed like a thing for the elite, the intelligent, the powerful, and mainly, the men. Obviously, it’s one of those things that you don’t actually know much about because, ahem, it’s a secret. But there are some well-known ones, like Skull and Bones at Yale, where new members supposedly get a grandfather clock because what young dude doesn’t want to tell time? Secret society aside, there’s something unifying about all sharing the same secret or even the same inside joke. If you were to create your own little slice of secret society paradise, what would it look like?

WOMEN IN NUMBERS: Almost 47 percent of U.S. workers are women

I venture to guess that the reason most documented secret societies are for men is because women are either too busy or smart enough to actually keep it secret. Almost 47 percent of people working in the United States are women, which means we don’t have time to put on funny masks and recite Latin in the courtyard. If someone wants to invite me into a secret society with healthcare benefits and a personal chef, that’d be great.

There's never one way to go about life or an education. You’ve undoubtedly seen the book written by today’s Woman to Watch. Your babysitter’s reading it, your church is hosting a book club about it, you just picked it up at the airport. An illustrated pencil on the cover makes it instantly recognizable. Tara Westover wrote this incredible memoir called Educated.

Tara’s story is one that sticks with you. It reached well beyond bestselling standards in 2018, as Tara explains her childhood in a Mormon fundamentalist home. Raised in Idaho, Tara didn’t receive any formal schooling and never went to a doctor’s appointment.

Her parents were survivalists. Tara would can peaches in the summer and salvage in a junkyard during the winter. She weaves a narrative that has left readers breathless, about isolation and violence and coming into one’s own. Tara did so by teaching herself math and applying to college.

She was accepted and from then until now, Tara has changed her path in life. Her determination and literary debut earned her a spot on Time’s 100 pioneers list. There’s something that really resonates in Tara’s story and that’s one of vulnerability. She opens up her heart as she shares stories of her older brother’s violence and the moment when she asked a professor what the Holocaust was.

For Tara, education made her who she is today, who she always wanted to be. She earned her doctorate degree at Cambridge University, despite a traumatizing falling out with most of her family members. Now, as Tara goes on press tours, she’s imminently humble. The success of Educated is just one joyous moment in Tara’s lifelong pursuit of learning.

“I just am fascinated by other female artists, probably because I feel a kinship with them, no matter who they are and what they do.”

December 21 Susan Wojcicki:
Why You Won’t Need a TV in 2019
May 12 Anita Sarkeesian: The Fight for Inclusion
April 20 Marley Dias: She’s Advocating for #1000BlackGirlBooks
April 6 Amy Millman: Put One Foot in Front of The Other
February 9 Miry Whitehill: She’s Helping Refugee Families
November 16 Ann Deal: Baring It All
Home Woman to Watch Articles Videos About