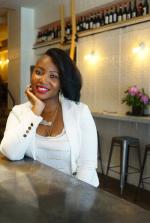 From Homeless to Self-taught Entrepreneur

Sometimes you don’t know how creative and innovative you are until you’re stuck between a rock and a hard place. I realized that while watching Bird Box, the Netflix thriller that everyone watched on Christmas. ‘Tis the season to see gruesome death scenes, am I right? Characters must be blindfolded to survive their new reality, and the idea’s unnerving. This isn’t just trying to find your way to the bathroom in the middle of the night; this is trying to survive and fight off “creature” kind of stuff. Today, don’t doubt your abilities. You might be tested and you might be surprised by just how resilient you can be.

What Sandra Bullock’s character needed in Bird Box was a tribe of women who have her back, but she had something perhaps even stronger: determination. The former and latter are essential when navigating new terrain, like a startup or tech biz. As we all know, women in tech are still few and far between, but the needle’s moving in the right direction. There’s still a lot of work to be done, particularly for women of color, who make up only 4 percent of women-led small businesses in America’s tech field.

FlyTechnista is an online platform developed by today’s Woman to Watch, TeLisa Daughtry. With that 4 percent in mind, TeLisa taught herself how to code and has been in the tech space for nearly two decades. While providing girls and women with technological skills is fantastic, failing to offer guidance on how to use those skills for a sustainable career is detrimental.

When TeLisa started her tech journey in the late 90s, she had no idea technology would eventually provide her with a steady paycheck. It certainly didn’t seem like it would eventually be seamlessly integrated into our every single day. As the years progressed and TeLisa made career moves, she began to connect women with job opportunities.

Giving women a chance and connecting them to key companies was a natural task for TeLisa, so it comes as no surprise that she’s developed a virtual area for just that. FlyTechnista offers membership packages that help members gain entry and access to attend tech conferences and even be on panels.

Being able to not only be the woman on stage, but also be a woman in the audience seeing a woman on stage, is a powerful thing. During a SXSW EDU session, TeLisa explained how a company’s culture can dissuade diversity without even realizing it. For example, if there’s a game room set up with beer pong and darts—or if the women’s bathroom is in no man’s land—that’s fostering “bro culture.”

TeLisa knows first-hand what it means to feel accepted, safe and welcomed, but her journey to creating FlyTechnista was arduous. She moved from Boston to New York City to freelance with music companies—that is, until Wall Street collapsed. While companies had hiring freezes and revenue down spirals, TeLisa lost her own ability to stay afloat.

She spent six months homeless with only a suitcase and backpack. TeLisa would mostly stay on the train as it ran its route, back and forth. If she did manage to gain a gig with a desk, she’d sleep there. It wasn’t until a colleague noticed her suitcase and TeLisa shared her story that TeLisa’s colleague offered her a room.

It doesn’t matter who you are or where you’ve been. Allowing yourself to be vulnerable, whether it’s sharing a part of yourself that you’ve had to keep hidden or learning a new skill and applying for that next big job, TeLisa’s story is a reminder that taking a risk is worth a shot.

TeLisa Daughtry’s story is one of great struggle and perseverance, but also one of success. She proves anyone can make it. Check out our three tips on how to dig yourself out of the dumps and turn your life around by clicking here or head over to OnTheDotWoman.com!

"...I often credit the fact that I didn't know the staggering statistics in my field. That allowed me to continue on. My mentees ask me, "It's almost 20 years! How do you keep going?" I tell them, "Because nobody ever told me I couldn't! ... My ignorance really allowed me to proceed."

April 13 Erin Albert: She’s an Advocate for Getting STEAMED
February 14 Lacey Baker:
She was a Sk8er Girl (Yes, They Exist!)
January 30 Nicole a'Beckett:
Get Involved in Your Community by Going Online
April 3 Amy Cazin: She’s Smellin’ Like Roses
May 4 Keli Dailey: She’s Got the Scoop on News Satire
April 5 Jan Ryan: Why You Should Quit Your Job
Home Woman to Watch Articles Videos About