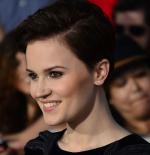 Your Favorite Writer Has a New Book (Hint: It’s Creepy)

Let’s talk ghostwriting. It’s a concept I’ve been passionate about since working at a bookstore. Before you praise Matthew McConaughey for writing his memoirs, remember that not every celeb goes pen to paper. As the word “ghostwriting” suggests, it’s nearly impossible to find out who writes it.

Some of your favorite books may have been ghostwritten, though, and we know for certain some that were, like The Hardy Boys and Nancy Drew. (More like Nancy Who, am I right?) Essentially, those franchises created an assembly line of unnamed writers, mostly for the publisher’s financial gain. The moral of the story? Dig deeper. Don’t trust your childhood friend’s Facebook link about so-called science, and don’t trust that everything—or everyone—is as they seem.

WOMEN IN NUMBERS: Less than 1 Percent

For a year or so, actress, TV host and author Busy Phillips filled her Instagram stories with images of her with airpods, at least four drinks and Microsoft Word. It’s tough stuff to write a book, and guess what? It’s just as hard to get anyone to read it. If you do the unthinkable and pen that novel, there’s less than a 1 percent chance that book will ever be stocked at a bookstore. Dismal, huh?

WOMAN TO WATCH: Veronica Roth, Author of the Divergent Trilogy

OK, y’all. I’ve delivered enough bad news for the day. Let’s talk about a woman who beat the odds and has found some serious success as an author. Veronica Roth’s her name and she’s the mastermind behind the Divergent trilogy. The series depicts a dystopian tale that seems far from her religious roots.

Veronica has earned a cult following for her young adult series, which, in case you didn’t know, is absolutely for ye’ ole adults, too. She wrote her first book while in college at Northwestern University in Chicago, and the series has sold millions of copies since. It paints a picture of a world divided by virtues, like honesty and selflessness, and when a citizen turns 16, she must decide which virtue to follow for the rest of her life.

The fictional tale is a highly competitive world that feels intimidating and questions your definition of trust. Storylines aside, readers are drawn to Veronica’s underlying message, one in which she shines a light on the concept of power: AKA who has it, who wants it, and if we should be afraid of it.

Someone in power clearly used it for good, steering Veronica toward becoming a professional writer. Veronica has been writing every day since she was 11. One of her high school teachers urged her to enter contests as a way to demonstrate her writing to potential colleges. He took Veronica seriously, and in turn, Veronica took herself seriously.

Veronica is now a full-time writer, since penning her Carve the Mark series. Last summer, it was announced that she has secured a two-book deal that will venture outside of young adult fiction. The first is a short stories collection that will be out in 2020. (Think Black Mirror with a dash of Veronica’s sensibilities).

As Veronica has grown, so, too, have her stories. I know what I’m reading next.

Another female writer who has a way of drawing you into imaginative worlds, J. K. Rowling, said:

"Whatever money you might have, self-worth really lies in finding out what you do best."