Why Don't Millennials Care About Voting? 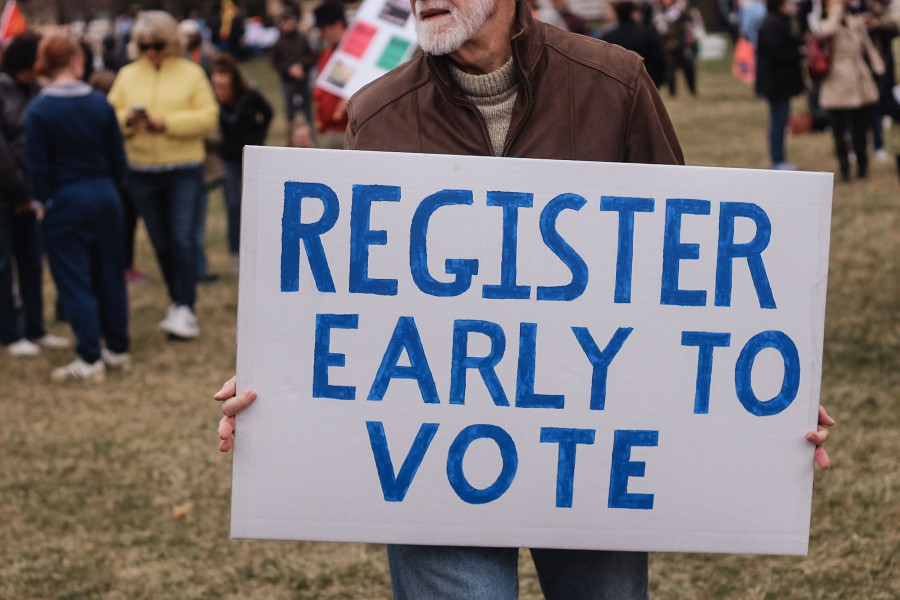 You guys! On The Dot recently had its first ever event! Our See It To Be It Success Summit was a huge, well, success, and it’s all thanks to the amazing panelists that spoke about all the things affecting women today.

One panelist in particular, FOX News Contributor and Board Chair of VoteRunLead Jehmu Greene, commanded the room, inspiring women with her words to consider running for office. The crowd lauded her, the room of women collectively feeling a sense of pride, prowess and motivation.

Coming back from such a spectacle, I couldn’t help but wonder the following: If many of us have, at some point or another, thought about running for office at any level, then why don’t so many of us care about voting? Hell, as editor at On The Dot, I even sent out a survey to female millennials asking them what would get them to start caring about voting. I got a sum total of nine responses, compared to our exclusive “Women, Are You Satisfied With Your Lives?” survey, which resulted in over 100 responses. That should give you an idea of how many people care – or, uh, don’t care – about voting, in relation to everything else that's going on in their lives.

The very first time I voted was in 2008, right after I’d turned 18. I was registered to vote in the state of Georgia, where I attended college, and spent nearly the entire day waiting in line to vote at one of the most influential polls, in one of the most influential elections our country has ever seen. After having done the deed, I felt super empowered, both as a voter and a young woman.

Because I personally felt heard and empowered by voting, I wanted to get down to the root cause of why so many of my peers are so apathetic towards voting.

31-year-old Megan Davis has a track record of not voting. She said: "I feel like my voice doesn't matter. People who suck still are in office, so it doesn't make a difference."

Kei Kawashima-Ginsberg is the director of an initiative called CIRCLE at Tufts University, which studies youth political and civic participation. According to her, there’s a “significant lack of knowledge about how exactly the government works” amongst young people, which could explain why older people are more likely to vote than younger people.

Megan’s choice to opt out of voting entirely is in line with how many other millennials view the importance of voting: While millennials have come out in droves to protest the current administration, an NBC News/GenForward survey revealed only 55 percent of millennials said they either probably or definitely would vote this November.

Only 55 percent of millennials said they either probably or definitely would vote this November.

...But They Have Very Strong Opinions

It’s tempting to conclude from the data that my generation doesn’t care about the issues affecting our nation. But indifference isn’t the issue; despite not wanting to vote, millennials feel strongly about all sorts of issues.

Harvard University’s Institute of Politics conducted a survey that found that millennials not only don’t know much about how the government works, but they also seem to distrust government officials.

This distrust has manifested itself in a revolutionary way. Millennials seem to be throwing their trust in themselves, instead, vlogging about the social, economic and political issues that matter to them on platforms like YouTube. Self-proclaimed feminist MarinaShutUp starts conversations about race and mental health. Staceyann Chin talks on a variety of topics like voting rights and women’s health.

Women like these two vloggers are changing the way young people talk about issues that matter to them, turning society into their own personal audiences in order to create the change they want to see in the world. While YouTube has changed the socio-political landscape by offering every millennial, woman and human a voice, it’s important to remember one thing: Young people make up half the voting population, so voting still matters. Not exercising that right impacts the way we see change from the top down, so it’s time we start caring a little more.

How to Start Caring About Voting

Take a cue from your favorite role models. A-list celebrities like Taylor Swift, who has infamously remained apolitical in the public eye, is urging young people to get out and vote:

And it’s working. A ton of Swifties (AKA Taylor superfans) went out and voted, which just goes to show the power of seeing someone you love do something you may not have done otherwise.

Educate yourself on the issues and the candidates. So, we know a leading cause of millennials not showing up at the polls is they just don’t feel informed enough to even make a decision. Well, it’s hard to use that excuse at all these days, with Google right at our fingertips.

Inform yourself! Find out who the candidates are, then go to their websites and read up on what they stand for. This shouldn’t take too much time, and you can do it in lieu of an online shopping session or Facebook stalking your ex.

Also understand you still won’t know everything you want to know. Look, there are some pieces of information about the government you just won’t be able to ascertain, like why certain politicians act the way they do, or what’s actually getting done on a day-to-day basis. But regardless of what’s going on in DC, your vote still matters. You don’t need to know everything, and accepting you never will may bring you some peace.

That being said, you can start to learn more about what goes on by calling up your local state officials regarding issues in your community that matter to you. This is probably one of the most basic ways to feel like a more active participant in making tangible change.

Register to vote in your state. Registering is super easy! All you have to do is fill out an application, and then mail it 30 days before the date of the election. Now, you have no excuses!

Realize that if you don’t vote, what kind of example are you setting for people you’d want to vote for you? If you’re a woman reading this and you’ve ever thought about running for office, you understand the impact of even just one vote. If you’ve ever given a speech, pushed for change or asked for help, you know it takes the voices of a group of people to make even just one thing happen.

If you believe in a cause, hold yourself accountable and vote about it. If you were that person in office that's counting on the votes of others, you’d be pretty darn upset if the people with the power in their hands didn’t help you do something about the thing they want changed.

As American women, it’s our duty to not only exercise the rights we have, but to lead by example and show the rest of the world how it’s done. It’s cool to care, and remember: You and your voice matter.

October 22 Breedlove's Briefing:
Aligning Employee Performance with Business Goals Is Key to Success
September 16 Celebrating 50 Episode of our On The Spot Interview Podcast:
Featuring Melinda Garvey and Terri McCormick
March 13 The Motivated Millennial:
How Millennials Can Take Control of Their Finances in Small, Simple Steps
August 26 Breedlove's Briefing:
3 Smart Ways to Self-Fund
May 24 Ask Rhonda:
Hard and Soft Skills You Need to Become a Techie
June 21 Here's How to be Sustainable and Eco-friendly this Summer
Home Woman to Watch Articles Videos About