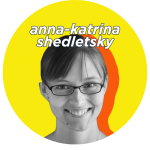 FIRST THOUGHT: Are you talking to yourself or that watch?

Remember when Bluetooth hit the masses? Everyone from your uncle to the cashier was talking to seemingly nothing, until they turned around and you saw their bulky earpiece. Nothing was weirder than when you’re standing in the grocery store aisle and wondering if the man asking questions is speaking to you, himself or that can of pinto beans. It was strange, right? I recall saying, are you really that busy that you can’t hold the phone? Now, I can answer calls on my watch, laptop, smartphone and car. I wouldn’t have it any other way, would you?

Despite what the empowering advertisements might suggest, not every STEM occupation is increasing female participation. For instance, there were actually more women who worked on computers before 1990. If you do get your paycheck from diving into the motherboard, we tech-obsessively thank you.

WOMAN TO WATCH: Anna-Katrina Shedletsky, CEO and founder of Instrumental

Anna-Katrina Shedletsky is one of those “computer women” we rely on so much. She’s smart, cool and has a hyphenated name—what’s not to love? Anna-Katrina helped design the first Apple Watch during her stint as a product engineer at Apple.

With a couple dozen patents under her belt, Anna-Katrina is well on her way to being one of the biggest tech names. She’s now the CEO and founder of a manufacturing data company called Instrumental. At Stanford, Anna-Katrina earned nearly a 4.0 in both undergrad and grad school. As a student researcher, she worked in the biomimetics lab before taking on an internship designing a medical device.

Her five years at Apple helped Anna-Katrina develop product manufacturing and design skills, as well as a general understanding of what it takes to take a product from stage to stage. She teamed up with another Apple employee to create Instrumental.

There are plenty of things that can go wrong when producing something. Anna-Katrina says that her time on factory floors led her to see these issues, like launch delays and quality issues. That’s where detailed and organized data comes in. Have you ever found a necklace knotted and jumbled? You know it’s wrong but don’t know where to even begin. Where does it start?

That’s kind of what Instrumental helps with. The company uses machine learning to find anomalies on the assembly lines. By tracing every component and movement from beginning to end, companies can detect issues easier and more accurately.

The idea to focus on this aspect of product development came about after Anna-Katrina spent nearly a year in China fixing problems in manufacturing lines. She’s fluent in Mandarin, which no doubt had a major impact on the knowledge she gained from the experience. With Instrumental and women like Anna-Katrina, we’re hopefully going to see a major emphasis on quality over quantity.

“The culture of tech companies cannot change if women aren't in the room.”