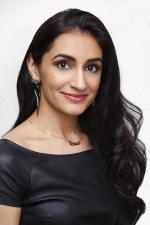 How to Go From Small-town Girl to Boss Lady

FIRST THOUGHT: The Art of the Deal

A few years ago, lifestyle mogul and former reality star Lauren Conrad sat down for an interview. Known for her crisp winged eyeliner and mounting net worth, Lauren’s the kind of businesswoman 20- and 30-somethings can look up to. Sitting on a chair at SiriusXM radio to promote her book, she was asked, “What’s your favorite position?” (You know, something someone would typically ask Elon Musk or Warren Buffett). Unfazed, Lauren artfully replied, “CEO.” Like Lauren, if you’re ready to lead the conversation in a new direction, remember this story and take the wheel.

They say millennials feel entitled, but is it so wrong to think you’ve got a lot to add to the world? It turns out women across the globe know they’ve got the goods. In fact, 74 percent of women in junior-level positions aim for senior leadership positions in their current organizations. Keep rising, ladies!

What does it take to be a powerful 30-something woman? Today’s Woman to Watch sure does make it look simple. Sheena Paul is the chief operating officer of a private real-estate investment company called World Class Holdings, but she started out as a mere small-town girl.

Sheena’s success story began when her father emigrated from New Delhi to the States, where he began his career as a doctor. Though she knew she was different—being an Indian-American girl in a majority white town—Sheena also knew being different could be an asset to her. After graduating from law school and traveling the world, Sheena became interested in underserved markets.

It wasn’t long before Sheena’s determination led her to New York, where she worked in international project finance. Later, she and her savvy brother joined forces to create World Class Holdings in a basement office, but their company now boasts almost 50 employees between New York City and Austin.

Some appear a bit surprised to see a woman closing deals, but Sheena’s used to doing it. Clearly, a little bit of doubt in the room doesn’t hold Sheena back, and her company is proof of that. World Class Holdings manages a diverse portfolio of properties in 17 states and has roughly $1 billion in assets.

That giant number doesn’t just fall into a lady boss’ lap. Sheena practices some serious time-management skills to really hone her productivity in the workplace. She spends a typical night writing up a list of priorities to tackle the following day. To many of us, though, one of Sheena’s other practices may seem the most difficult to follow through with: turning off phone notifications. By not having numerous notifications distracting her, Sheena is able to focus on a single task at a time rather than multitasking. We could all take a tip or two from her playbook and give our goals our full attention.

As the chief operating office of World Class Holdings, Sheena Paul is a woman constantly on the go. Check out how she harnesses her energy to stay productive despite her dizzying schedule! Click here or head to OnTheDotWoman.com if you’re listening via podcast!

“In the future, there will be no female leaders. There will just be leaders.”