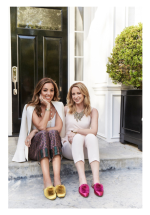 Do you ever make things more complicated than they should be? There’s something to be said for choosing the simpler option. Take exercise, for example: Those infomercials in the 90s would have you believe you couldn’t move without the X70-ultraflex-body builder, deluxe edition. Blogs make you think you won’t tone that tush without perfectly timed intervals. And sure, having a minute-by-minute plan of what your activity looks like helps, but sometimes that kind of pigeonholes you into thinking you can’t get going without X, Y and Z. There’s always one exercise option, though, that doesn’t take an app on your phone or a high-tech sports bra: walking. It’s a free, mood-boosting weight shedder, so why are you still sitting there? Go for a walk.

The only caveat of taking a stroll in your ‘hood is you have to wear shoes to avoid the whole possible tetanus thing. When it comes to footwear, there’s a lot to choose from; after all, the footwear industry is likely to be worth $320.44 billion within five years. If you still believe the old cliché that women are obsessed with shoes, think again. Time Money shows that men spend just as much on shoes as women nowadays.

Today’s Women to Watch, Bianca Gates and Marisa Sharkey, start their days on the go. Bianca grabs a hazelnut coffee at her local bagel shop, drops off the kids, catches up on emails and brainstorms with Marisa at a café near the office. These two gals are the stylish duo behind Birdies, a footwear brand that has Meghan Markle’s stamp of approval. Known for fashion-forward shoes with the comfort of a slipper, Birdies is the only Bay-area footwear biz created by two women.

Marisa has a background in finance, where she worked in private equity and then later in corporate strategy for Ross Stores. Bianca has a career history at NBC News, Viacom and Facebook. The two met more than a decade ago and became fast friends, forging a bond over their mutual love of entertaining at home. Both ladies know what it’s like to be on your feet, and while heels look fab, they can wreak serious havoc on your tootsies.

Bianca and Marisa’s response to this dilemma? Something called “7-layer responsive cushion technology,” which gives your tired feet extra comfort, meaning you’ll have another hour to walk around that networking party and work it, girl.

As Birdies rolls out new designs with varying color combinations and extra flairs like tassels, it can be challenging for the founders to stay creative. Marisa boosts her creativity by doing a meeting of the minds, if you will: She’ll get out and talk about new ideas, connecting with people. Bianca, on the other hand, heads to gym classes to clear her head.

Whether it’s olive-green velvet or celestial-inspired crystal embellishments, Birdies continues to combine elegance with ease. Maybe that’s why the company has announced a $2 million Series Seed round of funding. Part of its success is due to its online lifestyle content, as these two women sit down with other women who offer tips and tricks in areas like entertaining and traveling.

Marisa admits she’s not a natural risk-taker, but that in order to launch a business, you’ve got to be willing to take some risks. For her, it’s a balance between getting all the facts, doing all the research and sometimes just diving in, Birdies first.

One of Bianca Gates’ favorite quotes will hit home with all of us who are part of a team: