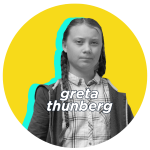 I Want to be Greta when I Grow Up

Climate Change. It’s one of those topics that I feel like I inherently sound like an idiot whenever I try to articulate my views regarding it or even summarize what it is. I don’t know about you, but when I feel like I will seem stupid, I don’t even try. One scientist shared that we must talk about it, though, regardless of how self-conscious we are. Remember, it’s not a conquest— you’re not trying to win a debate, you’re having a chat. If you’re worried about conflict? Don’t be. Bringing up climate change at the dinner table doesn’t need to result in agreement; the conversation is in itself a victory.

So, what’s climate change all about? Put simply, it’s variations of the average weather patterns that are expected to have long-term effects. Think, ice ages. Nearly every climate scientist agrees that what we’re experiencing now is a result of us, me and you, people. In fact, that’s 97 percent of whom believe human activity is the cause. It’s something that can impact everyone, regardless of where you live or what you do or who you are.

Last year, Greta Thunberg caught the world’s attention. Donned in a yellow raincoat, the teenager stood in front of Sweden’s parliament building. It was September and right before the country’s elections. Greta sat on the steps for three weeks.

After the election, Greta went back to school. Now, she’s on the steps on Fridays. She said members from the government have shown their support, coming out of the building to speak with her. Greta’s strong-held beliefs about taking action against climate change have been years in the making.

When Greta was in third grade, she developed an interest in the topic. Greta credits being on the autism spectrum for her heightened dedication to the topic. She’s stopped eating meat and riding on airplanes. Her family has installed solar batteries, they ride bikes for their main form of transportation and are growing their own vegetables.

Greta’s interests are fostered by her parents. Her mother is a well-known opera singer who would perform internationally until she, too, adopted to avoid planes. She’s also inspired by kids around the world who are standing up for what they believe in, like the Parkland High School walkout following the mass shooting.

This young climate advocate has made big speeches on big stages, like the United Nations COP24 climate talks, and has even been nominated for the Nobel Peace Prize. Greta has a unique ability to express the hopelessness many feel about the world edging toward a slow burn. She’s a woman of her word, refusing to attend an award ceremony due to air travel.

As Greta’s activism has spurred global conversations and change in kids and adults alike, I can’t help but feel like maybe our world is actually in safe hands.

Greta is direct about how she views climate change. She said:

“Listen to the science.”