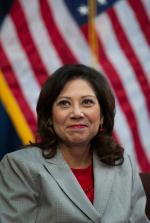 FIRST THOUGHT: Do Your Research

In some states, laws allow for disclosure of public officials’ salaries. You can look online to find contributions to candidates and which lobbyists did what. You can even search for your own doctor and see which pharmaceutical and medical device companies have paid him or her. A friend of mine explained how her vet kept coaxing her to add more tests, more shots, better food, you name it. She gave in a little and regretted it.

If you get a little timid before you step into the voting booth or the doctor’s office, do thorough research beforehand. If you’re armed with facts, you might feel more compelled to make a change and be happier in the long run.

For many women and people of color, a vote can ultimately be the biggest act of change. We’re consistently seeing more representatives who actually represent the areas they govern. Women broke records during the 2018 elections, when 102 of them took their seats in the House of Representatives. The job doesn’t necessarily offer a big paycheck, either. In New Hampshire, for example, legislators only get $100 annually. Officials in states like New York, Pennsylvania and California are paid tens of thousands more.

WOMAN TO WATCH: Hilda Solis, Representative of the First District on the Los Angeles County Board of Supervisors

What’s so mind-boggling about some of these female legislative wins is they’ve unseated dudes that have been in the position several times over. That’s exactly what happened with today’s Woman to Watch, Hilda Solis.

Hilda defeated an 18-year incumbent in Southern California in the primary election to the U.S. House. She’s accomplished, to say the least, having served several years in Congress. As the Representative of the First District on the Los Angeles County Board of Supervisors, Hilda has set herself up to achieve the immense, daily challenges faced in office.

Her parents emigrated from Nicaragua and Mexico, settling in the states to have seven kids. Hilda’s mom worked on a toy assembly line while her dad worked at a battery plant, and Hilda had to mature quickly to take care of the home for herself and her siblings. As a lifelong helper, Hilda believes that that everyone - rich or poor - deserves a clean, safe space.

Hilda went to school to learn about political science and then public administration. Since the mid-80s, she’s been a part of the political world. When former President Obama was elected, Hilda accepted his offer to serve as his Secretary of Labor. It’s the division that’s aimed at protecting 125 million workers in areas like wages, occupational safety, unemployment insurance, work-related rights, and more.

Some of the issues Hilda tackles include homelessness, criminal justice reform and arts equity. Most recently, Hilda authored a motion to create an Office of Equity within the LA County foster system, which would help transform the lives of African-american, LGBTQ and Latino children in foster care.

Championing for fair care, healthy living situations and community support isn’t a sprint; it’s a marathon. As Hilda continues to fight for marginalized communities, families and the people under her watch, we hope she maintains her streak of optimistic energy.