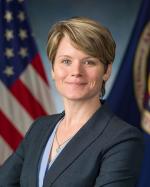 Who Says NASA is Just for Guys?

FIRST THOUGHT: Fly Me to the Moon

Remember that book, Men are from Mars, Women are from Venus? The bestseller painted a view of men and women as completely opposite, as if they speak different languages. We now know that the two sexes aren’t that simple or binary. Women can be from Venus, but can also spend some time on the sun and vacation on Jupiter. Men might be Martians, but might also chill on the moon, too. Here’s one thing I know for sure about men and women: We’re all part of the universe, and the universe is vast and complicated, and so much is yet to be understood.

Here’s a random thing I found out about space: Apparently, a spacesuit costs $12 million. Crazy, right? What’s cool about being an astronaut is that you can be a man or a woman or whatever, and as long as you can handle that 47-pound suit, you’re good. You know what’s even cooler? The most recent class of flight directors at NASA was 50 percent women. It looks like space won’t be the final frontier for women.

Sometimes, the way we women can be considered equal is by our gender not being considered in the first place. That’s something to chew on when you hear about Anne McClain and Christina Koch. At the end of March, these two astronauts became part of the first all-female team to carry out a spacewalk, and NASA says it was purely coincidental.*

While Anne and Christina step outside of the International Space Station to replace aging batteries, women back at Mission Control will help guide their journey. There have been more than 200 spacewalks over the course of the space station’s history, but there has yet to be a girl gang that’s done it.

Like with regular old companies, increased gender equality in space can be seriously beneficial. CNBC says the spacewalk will have some serious economic implications. Of course, I doubt Anne and Christina thought about that as they prepared for the mission. They both graduated from the 2013 astronaut class, which had more than an astounding 6,100 applications. Space is cool, y’all.

Anne stood out as a lieutenant colonel in the army and an engineer. Oh, and she’s an avid rugby player. When Anne took her professional NASA photo a couple years ago—something done before astronauts head to space—she brought along someone special: her 4-year-old son. (If you need an “aww” moment today, these photos will suffice.) Anne’s little one thinks it’s pretty normal to be an astronaut, and above all else, she’s just “mom” to him.

Christina’s also an engineer and has always wanted to be an astronaut. A North Carolina native, Christina gives space-loving folks insight into the day in the life of an astronaut through social media. She even posts from space, if you can believe it. Once up in space, Christina shared photos of her and Anne preparing for the spacewalk, which can last as long as eight hours.

There’s something about Anne and Christina that make the seemingly impossible look a little more attainable. Christina says that it truly is all about pursuing the life you’ve always dreamed about, even if it’s not laid out right in front of you. Anne’s advice? Tell that teacher who had a positive influence on you, “thank you.”

"Pay attention to the world around you and then find the places where you think you're skilled. Follow your bliss - and bliss doesn't mean it's easy!"