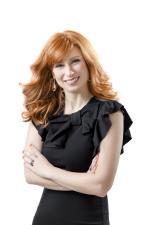 Being a grown-up means you can admit you are wrong. Your mom isn’t behind you, coaxing you to apologize insincerely. Admitting fault or guilt doesn't come easy for everyone. It takes practice; it takes vulnerability to admit that you made a mistake or that you don’t have it all figured out. Have you ever had a boss who will never, ever admit he or she messed up? It’s like this big elephant in the room and all the employees must go along with the ruse, pretending it’s just another, normal Wednesday. Nope, nothing to see here, folks. Take some accountability and own up to something. My guess is once you do, people will reciprocate, knowing it’s a safe environment to do the same. “Like” begets “like.”

WOMEN IN NUMBERS: More than 40 Percent

It’s always a surprise when you ask a server for her opinion on a dish and she responds with something that you know means she hates it, but she can’t come out and say that. Some aspect of selling is in your life, whether your position says it is or not. A server sells a new menu item; a writer sells an idea; a yacht captain sells a once-in-a-lifetime experience. Just because salespeople have the word “sales” in their title doesn’t mean it ain’t tough for them, too. Prospecting is the hardest part of sales, according to recent data: More than 40 percent of people whose main job is to sell find cold calling and emailing to be the most excruciating part of the gig.

OK, so cold calling, texting and pigeon-letter-carrying suck. We’ve all been on the other end; ignored, deleted and we moved on, right? But, like I mentioned, most of us do have something to put out in this world, and if it makes a little income then, hey, even better. Today’s Woman to Watch, Kendrick Shope, helps people find that special selling technique that will trade hang-ups and curse words for agreements and dollar bills in the bank.

When Kendrick hit national TV on the Steve Harvey Show, she presented her unique selling process called Authentic Selling as a way to “sell like a woman.” That means those old days of wheeling and dealing while playing poker and doing whatever it is that guys do are gone. Kendrick emphasizes that men often sell through confrontation because it’s something that lights up the pleasure centers in their brains, whereas women prefer relationships and socializing when selling. What this means is the tactics driven home in the past by men do not work for women.

Kendrick developed Authentic Selling after leaving a successful stint as a top-performing sales representative for a Fortune 500 company. Though the paychecks were coming in, Kendrick described corporate life as “soul-sucking.” She needed a change. Harnessing her Bachelor’s Degree in psychology and certification as a life coach, Kendrick decided to share her techniques with other women.

This sales guru says that women need to know how to sell, period. Have you ever negotiated with your kiddo to eat a vegetable? Have you ever had to sell a promotion to your boss? Kendrick offers a couple nuggets of wisdom: One of the most valuable, I think, is to consider offering a short-term offer for free to a sample audience. It’s a way to test the idea or product while also producing quantifiable results.

Another easy task you can do on your lunch break today? Create a Facebook group and Facebook page tied to your business. Assume your role as the expert in your field. Cultivate genuine relationships through social media, so you don’t have to rely on prospecting when you want to sell your new product or land that next client.

These days, it seems like everyone’s glued to their laptops. Well, the good news is you can build your biz just through the screen. Check out our five ways to build a six-figure business from your laptop by clicking here or, if you’re listening via podcast, head over to OnTheDotWoman.com!

"Doubt is a killer. You just have to know who you are and what you stand for."