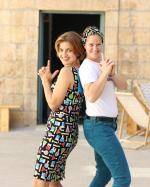 Why Science is Stellar, Not Boring

FIRST THOUGHT: Side Joy > Side Hustle

It seems like everywhere you turn, you see another article, another hashtag, another coffee mug with the word “hustle” in pretty script. Now, most women I know have some sort of side hustle on top of their other hustles, like parenting and working full-time. What about instead of having a side hustle, we had a “side joy?” One blogger shared her plans to make this pivot, as the hustling part of blogging really robbed the joy out of why she started in the first place. What would happen if you explored an idea that may not be filling up your pocket but, instead, is fulfilling? Today, look at your interests and see if there’s a pattern. How can you turn them into your “side joy?”

Determining a “side” joy might seem daunting, but it’s as simple as asking yourself what it is that makes the time fly; the things you always manage to fit into your schedule without an obligation. For example, I will spend an entire flight reading Scientific American cover-to-cover, but I’m not about to quit my day job to pursue a doctorate in neuroscience. But who knows? Maybe my affinity for it might just progress into a full-fledged opportunity. Science, after all, is only becoming more and more necessary. Over the next decade, the number of STEM jobs will grow by 13 percent.

Margot Stern and Dr. Yael Schuster are two women whose side joys have blossomed into full-fledged professions. The women are behind the multimedia edutainment company StellarNova, and they’re described as two of the most extraordinary women in Israel.

Margot lives in Jerusalem and is a senior advisor and partner at a number of startups, like CleanTech, while Yael has an impressive expertise in organic chemistry and the chemical industry. These women crossed paths when Yael hired Margot, as Yael was starting an educational community and toy line that would encourage girls to become rockstar scientists.

Known as “Dr. Mom,” Yael was onto something. So Margot jumped aboard and now, the StellarNova biz is comprised of a six-member, all-female team. While Margot offers an entrepreneurial vision, Yael uses her STEM knowledge to pinpoint the best approaches to reaching kids through interactive products, games, books and more. One of those products is the Jet Car kit, which teaches eight-year-olds the science behind and importance of recycling.

What Margot and Yael are offering is revolutionary, in part because encouraging girls to be interested in STEM is very much still taboo. There’s no doubt that these women see the power of influencing a younger generation, as their influence will impact the subsequent generations to follow.

When StellarNova won the MassChallenge Israel Diamond award a couple years ago, the team was presented with a big check and a photo was taken. The group gathered and smiled for the picture, including a couple of the team’s kiddos. It’s apparent that Margot and Yael have approached StellarNova not as some distinct venture that’s separate from their home life, but instead, they’ve shaped a company that’s flourishing with the help of the children in their lives.

"Don't let anyone rob you of your imagination, your creativity, or your curiosity. It's your place in the world; it's your life. Go on and do all you can with it, and make it the life you want to live."