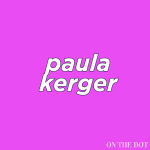 Your Favorite Public Programming Has a New (Female) CEO

We’re in an age where parent shaming is higher than the humidity levels right now. Peers say their little Joey and Johnny don’t even know what an Oreo is, and grandma and grandpa explain that back in their day, kids entertained themselves with a stick and a pot. What others share doesn’t necessarily translate into pure honesty or exact memory, right?

Before you feel ashamed as you hand your niece an iPad, remember that a few decades ago, women drove around with a baby on their lap and a cigarette in their mouth. You’re doing your best. Perfection is the enemy of greatness. So ask yourself: Is your niece safe? Is she clean? Is she fed and clothed and loved? Then you’re doing great, girl.

WOMEN IN NUMBERS: More than 70 percent

I’m a little jealous of how easy it is for kids to watch whatever they want. There’s a reason why 8-year-old me memorized every episode of the Bob Newhart Show, and it wasn’t by choice. (Sorry, Bob). Aside from having access to nearly any show or movie they want, kids also have greater access to the devices that play them: More than 70 percent of children and teens have televisions in their bedrooms.

One area of entertainment that parents and kids can agree is plain-old good? PBS. You’re not going to see those unbearable unboxing videos on PBS, and for that, every parent is grateful. Paula Kerger joined the PBS family more than a decade ago, and is the new president and CEO. Before diving into Paula’s well-regarded tenure, let’s take a stroll down memory lane, past Big Bird and the gang.

PBS began operating in 1969 as a program distributor rather than as a traditional network. That means each PBS station is responsible for providing local content like gardening shows and travel specials. National programming focuses on fine arts, like “Masterpiece,” “Antique Roadshow,” “Austin City Limits,” and “Frontline.” PBS is my go-to when it comes to home improvement, as it’s less about demolishing walls and more about fixing your broken faucet.

Paula’s been in her current position longer than any former PBS president, and there are a few reasons why. She’s not afraid to advocate for public broadcasting. When President Trump mentioned cutting federal funding for public broadcasting channels like PBS, Paula reminded us that it’s “#1 in public trust” and has earned bipartisan support.

“Viewers like you” help keep PBS running its educational content, with the average citizen donating a dollar or so a year. Paula says it was Downton Abbey that reinvigorated interest in PBS, making it part of catching up around the water cooler. As one of the “Power 100 Women in Entertainment,” Paula has her whole gig down pat.

It’s unsurprising why. Paula spent several years in the educational space before heading to PBS. And before that, she worked on fundraising for the MET. Her tenacity and experience have helped guide PBS as becoming a recognizable name to a new generation.

The key to doing that is Paula’s commitment to accessibility. Paula shares that America’s uneven education system means public broadcasting is more crucial than ever. After all, as Elmo said, it’s all about singing and dancing and making people smile. That’s something everyone deserves.