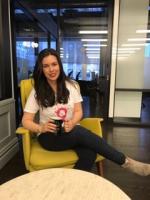 As I was sitting in the pleather massage chair at my local nail salon, I wondered where all this started. When did we decide that we should paint our nails? As early as 3000 BC, the Chinese created nail stains from veggie dyes, beeswax and egg whites. Sounds delicious. By the 1930s, a couple brothers created Revlon, which made nail polish a mass-market commodity with shades beyond standard red. The most popular style back then was a half moon manicure: The tip and area by the cuticle was covered only by a clear gloss, while the rest of the nail was one’s color of choice. Nail upkeep can be time-consuming and expensive, but isn’t a confidence boost worth it?

A Latina writer shared what manicured nails meant to her, her family and her culture. She was taught that nails send “a message to the world” and show a sign of respect. (Let’s just say my nails are flat-out rude right now.) Fun fact: Hispanic entrepreneurs have started businesses at about 15 times the national average over the course of the last decade or so. Maybe their fresh lacquer gave them the confidence to follow their dreams?

Getting fresh fingers takes some work, y’all. We’re busy women, and sitting in a chair for an hour and watching soaps on the TV doesn’t always fit into our schedules. If you’re in NYC, check out Paulina Serrato’s mobile biz at maniorpedi.com. Yep, you heard that right: The nail salon comes to you. That’s the stuff of dreams.

Paulina moved to the city from Mexico to attend fashion school with the goal of becoming a designer one day. After learning the ropes of fashion merchandising, she got her first job in the industry at a big department store. What happened next is something I think pretty much all of us can relate to: The gig didn’t feel as gratifying as Paulina expected.

This, after all, was her dream. It’s why she radically altered her life, moving from Tijuana to New York City, the city that’s supposed to be the heart of the American dream. But instead of throwing herself a pity party, Paulina made a bold move to self-actualize, and thus, her mobile nail biz began.

Part of launching her brand included researching every single wholesale nail product supplier, and then visiting them in person to figure out if it was a connection worth making. “Don’t be shy,” Paulina says. “Ask questions.”

After six months of planning to launch her biz, Paulina had a choice: Would she quit her steady paycheck and put 100 percent into maniorpedi.com? It was a risk; a crossroads many entrepreneurs must face. Paulina says her family gave her the strength to venture into the unknown. It was a stellar move, seeing as she made more cash in the subsequent year as an entrepreneur than she did at her full-time gig.

But what’s significant to mention about Paulina’s role is that it’s ever evolving: There’s no such thing as a stagnant year. She shares that she’s always on the hunt for the perfect towels, always updating the website, always looking for more opportunities to grow. It’s scary as hell, but it’s also an adventure that, in Paulina’s case, has paid back tenfold.

Every first-time entrepreneur flails, but they just need to know the right tips and tricks. Check out Paulina Serrato's 5 must-knows to succeed as a first-time business owner by clicking here or heading over to OnTheDotWoman.com!

Part of what’s made Paulina Serrato a burgeoning entrepreneur is her inner strength and open respect for both those she works with and who works for her. She said:

"I'm Mexican, I'm a woman and I own my own successful company. And if I can do it - you can too."

June 14 April Daniels Hussar:
A Look Behind the Doors at Romper
April 2 Destiney Green: She’s Your New Mom Crush
May 23 Jenny Thompson:
Ever Been Scammed on the Internet? Then You Need to Read This
January 22 Hannah Hart:
Coming Out, 2019 Style
June 6 Melialani James: Aloha to Startups
November 8 HeHe Stewart:
This Service Will Change Your Postpartum Process
Home Woman to Watch Articles Videos About