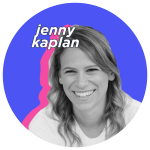 This Might be Your New Favorite Podcast (Besides OTD)

In June, On The Dot’s Instagram featured a day-in-the-life of one of our interns, Taylor Marshall. Not only did we get to see her adorable pup, but we also got to see what it’s like to be a driven college student. There’s one thing Taylor shared that has stuck with me. She took a photo of her journal and explained that she likes to write about her day in terms of what went right, what could be improved. Then, she said, “Self-care doesn’t have to be complicated.”

I feel like we’ve almost gotten away from what self-care means. It’s not a $500 gold-foil facial. (There’s no entrance fee to taking care of yourself). It’s not three hours of mediation every day. (There’s no time requirement). Sometimes, self-care is taking a few minutes, breathing, scribbling and resetting.

One form of self-care might be listening to podcasts. It doesn’t even have to be a podcast that enlightens you on how to improve your life. It can be a true crime one, or one that’s literally about trying to help you fall asleep. Podcasts that make you LOL are inherently good for your soul…and your road rage. Despite there being approximately a bazillion podcasts, women account for only 22 percent as hosts.

Nothing makes a busy woman more furious than a 2.5-hour-long movie that should’ve been an hour, tops. (I’m looking at you, Transformers). The same can be said for podcasts. If you’ve got 10 million listeners, consider editing just a tad so I can have time to see my family instead of sitting in the car to finish. I digress. Jenny Kaplan understands the need for short-and-sweet podcasts, and for that, I’m grateful.

Jenny is the host of Encyclopedia Womannica, a hip podcast that features stories of women every single weekday. The podcast is published by Wonder Media Network and gives you the deets on women in history…all in about five minutes. Shira co-founded Wonder Media Network with Jenny. In other words, you can feel like a smarty-pants in less time than it takes to find tonight’s date on Bumble.

Some of the women Jenny features are pioneers like Murasaki Shikibu, the author of what has been considered the very first novel. Get it, girl. There are other recognizable names like Sandra Day O’Connor, so after five minutes, you no longer have to pretend you know everything about her.

What I particularly love about this podcast is that the hosts aren’t afraid to go back—way back. I’m talking 800 BC when, according to the history books, only men existed. Part of what makes the podcast work is its succinct storytelling and researched accounts. This isn’t just some hobby for Jenny and Shira.

Jenny and Shira met in the most apt setting: an entrepreneurship class in college. Jenny launched her career as a reporter. As it turns out, she got increasingly interested in women’s stories when her mom ran for Congress in 2017. (Go, mama!) So Jenny quit her job and convinced Shira to join in. At the time, Shira had been helping a philanthropist grow an online yoga community.

It's been just over one year since they founded Wonder Media Network, and since then, the company has taken on a life of its own, as Jenny and Shira have helped produce shows for other organizations and have put out a handful of podcast series. Shira says that being friends first and business partners second took a lot of strategizing and “exhaustive” conversations. The two women now balance the honesty necessary for running a biz with the warmness required for a friendship. And it looks like it’s working.

"Some failure in life is inevitable. It is impossible to live without failing at something, unless you live so cautiously that you might as well not have lived at all - in which case, you fail by default."