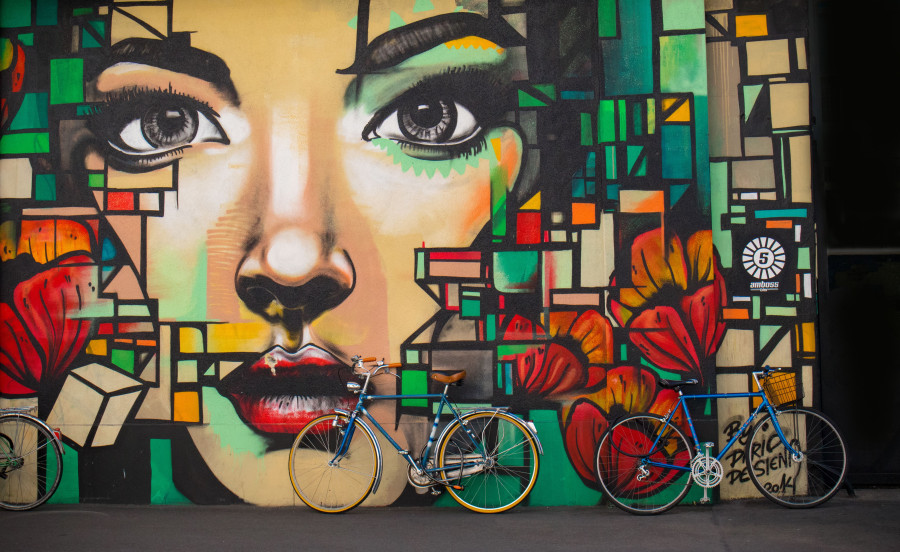 Being a businesswoman is hard enough on its own, but being one in a big city brings an added level of stress. I work in New York City, and while I love the city because of its colorful walls, variety of people and endless inspiration, it can be financially, emotionally and physically draining to live in. Cities are more conducive environments for the arts, but they're also hard as hell to make it in, and it's sort of a paradox.

Below, I share some of my tips on not only how to stay sane in a city like the big apple, but also how to stand out in your creative field. (Because, hey, if you've got a cool idea for a project or business, chances are someone else has the same idea. We artists are all like-minded people.)

Growing up, I loved fashion, and then I got into styling, which is when I realized you really can make a statement with your look. My art was becoming more and more of a statement as I continued to paint. While sitting on the street next to one of my pieces, a little kid rolled by in a stroller and pointed to my claw. The child looked at it, then to her mom and said, “Look, mom, the claw!”

That’s when I knew I had something different than every other artist in the street. I made a statement, something young girls looked up to. So, being a natural stylist, I decided to put my art on a shirt and see what could happen. It was a success, to say the least.

Know What Inspires You

Just walking around New York City streets is where most of my inspiration comes from. I love life and feast on creativity. If you’ve ever been to New York, you will notice that each street has its own creative spin.

Rise To The Top In A Male-Dominated Industry

When in business meetings with men, I always made sure that they were on my level. Remember: it is ALL about you in meetings. Don’t forget that or let them make you think differently. Being in street-wear, which was and still is mostly male dominated, you really need to make them understand where you’re coming from.

Make Sure You Don't Let The City Swallow You Whole

The key to surviving in the city is to always have hand sanitizer on you! Keep your head up and look both ways before crossing any street. Look for fashion everywhere; the little hole-in-the-wall stores have the best things. Keep a $20 bill handy because you never know when you will find that gem that will be in your closet for a lifetime. Or, you may need that $20 to take a cab home one night.

June 14 The Path to Entrepreneurship:
Tips to Launching A Business While Keeping Your Day Job
August 15 Three Ways to Feel Comfortable in Your Own Skin During a Presentation
October 11 Three Things Worth Fighting For:
Your Happiness, Your Dreams & Your Ambition
August 22 How to Stay on Top of Your Sexual and Reproductive Health
April 19 A Guide to Earning Your Spot and Surviving in the Director’s Chair
July 23 From The Inside Out: Five Ways to Thrive
Home Woman to Watch Articles Videos About