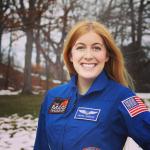 Look Up to Look Back

All it takes to blow your mind is to think about stars: No, not the Hollywood kind. The up-in-the-sky kind. When I went to the planetarium a few years ago, I looked through a powerful telescope and saw stars that, according to the genius dude who worked there, were actually many years past. When we look deep into the galaxy, we’re looking at centuries before us, since it takes a while for us humans to see the light. That’s how wild this world is, that something we barely notice up above actually contains so much to discover and comprehend. If a quick Google search of something space-related leaves you puzzled, I’ve got a pro tip for you: Add the word “kids.” You’ll get a basic education. Trust me.

I think we women tackle so many moving pieces throughout the day that the idea of making a career related to space just contributes to major overwhelm. (Like, great, I have to know stuff about this big black universe that seemingly never ends? Cool, totally not stressing at all.) Here’s a marvelous fact, though: Women are getting more and more gutsy and tackling the great unknown at NASA. In fact, in 2016, half of NASA’s astronauts were female.

WOMAN TO WATCH: Abigail Harrison, Founder of The Mars Generation and STEM Advocate

I’m sure every astronaut gets asked which team they’re on: Star Trek or Star Wars? But seriously, we want to know. Something tells me astronauts don’t have time for grandiose depictions of their jobs.

Today’s young Woman to Watch, Abigail Harrison, says that at just five years old, she looked at the sky and knew she wanted to experience a life beyond earth in, dare I say, the final frontier. She’s been outspoken about her dream, particularly about wanting to be the first person to walk on Mars. At 13, she created a Twitter account to contact NASA for a school project, but what Abigail discovered instead was a community of people that was just as psyched about space as she was.

“Astronaut Abby" is what many have called the leader of this next generation. At just 15, she was invited to attend a launch with her mentor, an astronaut named Luca Parmitano, and assumed the very futuristic-sounding role of “Earth Liaison.” Using her social media skills, Abigail documented Luca’s experience in space and shared it with the public.

Part of Abby’s esteemed title comes from the nonprofit she founded in college called The Mars Generation. With more than a million followers on social media, Abigail has taken The Mars Generation to Mars-like distance by advocating for human space exploration. She believes that with the right investments in exploration, setting her feet on Mars in the 2030s is possible.

Like many women in STEM, Abigail’s faced her fair share of snide remarks and vexing questions. Take, for instance, her first pilot instructor, who wondered if she’d really go to Mars because by the time she’s ready to go, won’t she want to have children? Ugh. What so many others and I find inspiring about Abigail is that at just 21 years old, her age has been an asset to her, not a liability: When you’re younger, it’s easy to feel discouraged by the sage women above you or before you. But take it from Abigail: You can be five years old and already have it all figured out.

With her nonprofit and social media reach, Astronaut Abby is paving the way for younger women to break the mold in an industry that’s slowly becoming less and less male-dominated.

Whether you’re becoming an entrepreneur, an activist or an influencer, there are certain things you should be prepared to expect on your journey. Check out Abigail Harrison’s four tips on what to expect by clicking here or heading over to OnTheDotWoman.com!

"For women, it's especially hard. We get told that messing up is the worst thing that could happen and that [it] means we haven't succeeded ... but you have to fail. It allows you to grow."

August 3 Beverley Bass: She’s Flyin’ High
March 13 Hannah Chung: She's Innovating for Kids' Health
September 6 Samantha Dong:
Your Hunt for the Perfect Heels is Over
December 3 Greta Thunberg:
I Want to be Greta when I Grow Up
August 2 Megan Hayes and Kimberly Reilly:
Why Water Bottles are So Last Year
August 14 Bethany Edwards and Anna Simpson:
How to Test for Pregnancy at Home in a Revolutionary Way
Home Woman to Watch Articles Videos About