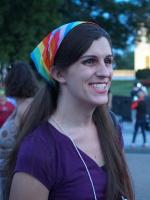 Let me tell you a story. It’s about the Civil War. (I promise you won’t fall asleep). There’s no story of battles on some hill or dates to memorize. It’s the story of Albert Cashier. He was a soldier who fought in a couple battles, and after the war, he worked as a janitor and farmhand. During one of these post-war jobs, he suffered a leg injury and was placed in a veteran’s home. Then, it was discovered that Albert was born Jennie. He was placed in a mental institution and forced to wear women’s clothing. His fellow vets successfully testified for Albert to keep his military pension for the rest of his life. There’s something to be said for friends who just “get” you and stand up for who you are.

It’s been more than a century since Albert’s story and, in many ways, nothing has changed. We’re slow learners, y’all. It’s not enough for your friends to get you; the laws have to “get” you, too. That means protecting you from trans violence. Transgender individuals are 3.7 times more likely to be victims of police violence than cisgender survivors and victims of anti-LGBT violence.

Danica Roem made history in 2018 when she was sworn into the Virginia House of Delegates. The first openly transgender woman to be elected to the United States Legislature, Danica has been instrumental in paving the way to recognize trans politicians.

Danica grew up in Virginia and got interested in politics in the mid-2000s. That was when then-President George W. Bush proposed a constitutional amendment to prohibit same-sex marriage.

Recruiting played a big role in Danica’s entrance into politics. We often talk about how women can get involved on their own, but so many politicians make the leap after getting a little convincing from someone in the arena. (Think Leslie Knope getting into the city council race). In the case for Danica, her local political party as well as Virginia's Delegate Rip Sullivan recruited her - and girl, it didn’t take much convincing.

Danica’s 2017 campaign was her first. It was a seemingly impossible race against Bob Marshall. He had been a 13-term incumbent. That’s right—13 terms, or 26 years. Bob was a classic Good Old Boys Club member and notorious anti-LGBT advocate.

Part of what led Danica into politics was her time as a reporter and news editor. It was here that she became educated on policies and what was happening in her community and surrounding communities. The Virginia Press Association awarded her several times for her journalism work.

When it comes to politics, we all know that it isn’t just about the issues; it’s about money, honey. Danica raised nearly five times as much as Bob in the election against him and, spoiler alert, she won. But Danica doesn’t only want to be remembered as the first openly trans woman to be elected. During the race, she remembers how an opponent was labeled as a “former prosecutor,” while Danica’s gender identity rather than her years as a journalist defined her.

We have a long way to go before we stop viewing each other as different and realize we must work together, but Danica’s just getting started.

"No matter what you look like, where you come from, how you worship, who you love or how you identify, if you've got good ideas, you can bring those ideas to the table. ... This is your America, too."

November 1 Anna Bulbrook: She's Rockin’ to a Feminist Beat
February 20 Paulina Serrato:
The Greater the Risk, the Greater the Reward
May 15 Naomi Osaka:
The #1 Way to Avoid Physical Burnout
May 3 Holly Dowling : Life’s a Beach / Follow Your Bliss
November 15 Danielle Williams: Why You Should Go Off the Grid
December 14 Kim Newsome: This Lone Star Calls Her Own Shots
Home Woman to Watch Articles Videos About