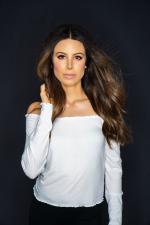 FIRST THOUGHT: Breaking Up is Hard to Do

At a concert I recently attended, the band played several songs about love, both lost and found. One of the musicians talked about playing a particular breakup song she wrote when she was just 19 years old. During the course of the last decade of singing the song, she said she was in awe how connected audience members were to it. The emotions of a breakup, regardless of the details, are something pretty much everyone can connect with. Today, we’re talking about not only surviving but thriving after a breakup. This is your reminder, ladies, that you’re better without your ex!

For women who endured breakups back in the 1950s, I imagine the heart-wrenching situation went something like this: She’d call him, listen to him answer with a normal, not heartbroken-sounding “Hello?” then promptly hang up the rotary phone. That was about the scope of post-breakup stalking back then, but these days, the internet makes getting over someone a heck of a lot more challenging. One recent survey discovered 74 percent of women say they think about an ex too much. And 50 percent of women say they just can’t say no to their ex’s social-media pages. Naturally, fewer men say they pine over their exes. Surrrrre!

OK, so you’ve recently experienced a breakup. When you aren’t checking your ex’s Facebook posts, you’re searching the internet for ways to feel better stat. Never fear, ladies. Natasha Adamo is here to help ease the sorrow and provide a whole new perspective on breakups, one that will have you happily embracing the single life.

She’s the founder of a blog called Post Male Syndrome, aka PMS. Apart from having a wonderfully cheeky name, Post Male Syndrome provides an honest yet empowering look at all things relationships: the good, the bad and the ugly. It’s in an effort to help women bounce back from breakups and become the most unapologetically confident, healthy, happy and badass versions of ourselves possible.

Regardless of who you are or where you are in your relationships, Natasha knows loneliness is a feeling we all endure at one time or another. Her blog—which features in-depth content about a variety of relationship issues, from friendships and heartbreak to forgiveness, gratitude and self-improvement—offers straightforward, realistic advice that’s meant to help women master the bounce back in every aspect.

And just in case a thorough read won’t do the trick, Natasha also offers one-on-one coaching via phone, Skype and in person to brokenhearted folks in 19 countries throughout the world. After all, sometimes you need some real talk from an unbiased relationship guru to help get you over the heartache blues.

Of course, Natasha is no stranger to heartbreak herself. Her first experience occurred when her parents divorced. Later, a shattering breakup resulted in a scene we can all relate to, one that involved dry-shampoo showers and internet stalking from bed. Mmm hmm, we get it, girl!

Thankfully, with a little support from family, some much-need yoga therapy and the intent to finally allow herself to feel her emotions, Natasha discovered her path to self-love and acceptance. She started respecting herself and stopped looking to men, friends and possessions for validation.

It’s that sense of self-worth and joy Natasha brings to her devoted PMS readers. And we’re definitely on board with this relationship authority’s advice. As Natasha says, “No one is that important that loving them should mean you’re doing so at the expense of your self-worth.”

“Don’t you dare, for one more second, surround yourself with people who are not aware of the greatness that you are.”

September 7 Stephanie Uchima:
How to Make the Most of an Unpaid Internship
June 7 Patti Rogers: Streamlining and Simplifying
August 20 Cherie Mathews:
One in Eight Women Will Develop this Disease
August 25 Julieanna Richardson: Preserving African-American Memories
February 18 Margot Stern and Dr. Yael Schuster:
Why Science is Stellar, Not Boring
November 5 Alice Zhang:
These Illustrations are EVERYTHING
Home Woman to Watch Articles Videos About