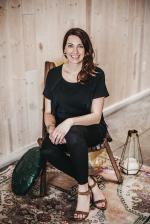 Heads Up! Your Shower Thoughts Might be Your Life’s Calling

What are your shower habits? Hot enough to boil tea? Cold and boring like your ex? Here are some tips to remember the next time you suds it up. We’ve heard it for years now: That loofah is a breeding ground for bacteria, so unless you’re replacing it every month, bid it a permanent good riddance. Unfortunately, we lose 50–100 hairs a day, which can end up clogging your drain. Try using a strainer to catch ‘em and grab yourself an auger, which is an inexpensive bristled tube thing (technical, huh?) to retrieve your long-lost strands. (That’s super fun and not disgusting at all). After that, Martha Stewart says you need to scrub your bathtub and shower walls once a week, so if you do that already, you’re basically Martha Stewart.

I polled my girlfriends about water temperature. The dudes in our lives think we’re absolutely insane because our showers spike past triple-digit temps, which I love because that just tells me that women are tougher than men. While some guys are splashing in their tepid water, others might be singing or partaking in a shower beer. And did you know that 72 percent of people have their most creative ideas in the shower? Yep. Feeling stuck? Turn on the faucet and grab the loofah—oh wait…

Remember when everyone had rugs on their toilet seats? Like, who thought of that? What purpose did it serve? If there’s one thing that’s stuck around for centuries, it’s rugs, but thankfully, most are seen on the floor.

Alli Pozeznik decided that she was going to “act on inspired thoughts.” One such inspired thought? Vintage rugs. So, Alli acted on it, and now she runs an unlikely business as the owner of Austin Rug Company.

Alli’s wise beyond her years. She grew up with parents who fostered her sense of creativity, inspiring her through art classes and crafting at home. But it’s hard to imagine a life fueled by creative ventures that also pays the bills. So, Alli pursued a career as a nurse and in medical sales, fields that ultimately taught her how to be tenacious.

Creativity called, though, which led Alli to partner with rug purveyors and curate a collection of chic vintage rugs. There are plenty of perks to adding a rug to a room, from noise reduction to a sense of feeling more grounded and connected. When you choose a rug with a rich history, it can add more depth and charm to a space.

Alli’s curated pieces act as pieces of art. The colors are vibrant and the patterns, memorable. Her pieces are reminiscent of the growing trend of looking for ways to reuse and recycle, and finding the beauty in giving objects a second, third or even fourth home. Intricate weaves tell a story, one that Alli’s excited to share.

As this rug-preneur says, “You can do anything, but you can’t do everything.” She suggests finding a friend or two who are entrepreneurially driven that can support you, while also giving you truthful feedback and credible advice. It’s also totally doable to find your North Star by using free resources, like websites that provide sample business plans and budgeting software.

Some of the wisdom Alli shares is to put your ego on hold and allow yourself to be uncomfortable around smarty pants-type people. You could learn a thing or two. It’s like what Marissa Mayer said:

"If you're the smartest person in the room, you're in the wrong room."