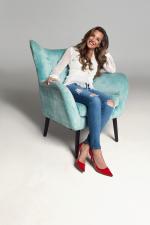 One of Tech's Leading Ladies

FIRST THOUGHT: A Little Lipstick—and a Lot of Confidence—Goes a Long Way

In one of the most iconic films ever, Breakfast at Tiffany’s, Holly Golightly, played by the ever-so-charming Audrey Hepburn, sits in the back of a cab, holds up a compact mirror and puts on pale-pink lipstick. It’s a simple yet unforgettable moment, and one that has stayed with viewers since the film was first released in 1961.

That’s the beauty about beauty. There will be fads and there will be innovations in the cosmetics business, but the power of a little color on your lips—and the knowledge that real beauty comes from within and living life on your own terms—will never fade.

While we often talk about the lack of gender diversity in industries like technology, beauty appears to be a different story. When women who work in the cosmetics industry were surveyed, 71 percent responded that men and women are treated equally by their employer. This might be due to women holding leadership positions more so in cosmetics than in many other industries. At a beauty company, everyone from the C-suite ladies to the customer-service gals understand that women are complex and smart and far from stereotypical.

If today’s Woman to Watch were a lipstick color, it would have to be Estée Lauder’s “Empowered” shade. This red-orange hue is as luminous and confident as Rhonda Vetere, the diligent former chief technology officer at famed cosmetics giant Estée Lauder.

This dynamic woman had an amazing 25 years of experience working in male-dominated industries all over the world before she made her way to the beauty dynasty that is Estée Lauder. Seriously, y’all, she is a true business powerhouse! Rhonda started her career in telecom and then eventually transitioned to financial services, all while garnering a lot of well-deserved acclaim.

Named one of the top 100 chief technology officers in the STEM world, Rhonda acts as an agent of change and a builder of better business. She’s known for her creative approach to management, which comes from a simple philosophy: Treat people as you want to be treated.

There are 10 guiding principles Rhonda strictly adheres to when it comes to business, fundamentals that many women can adapt in their own paths toward leadership: be prepared, be on time, listen first, be accountable, communicate openly, display managerial courage, show respect, be honest, recognize your team and know your metrics.

One thing that doesn’t stop Rhonda is geography. She is a real globetrotting business leader. When I spoke with Rhonda, it was her first day home after spending six weeks on the road. Such exhaustive travel is integral to Rhonda being effective at what she does because she must keep a close eye on the pulse of people and the marketplace.

Part of Rhonda’s travel stamina comes from what she calls her sanity: running. After completing a marathon, Rhonda flew to India within eight hours like it was no big deal. And she most recently ran 55 miles in three days through the African bush in the first ever Serengeti Girls Run. I’ll definitely be motivated by that thought the next time I complain I’m too tired for a 30-minute spin class!

This powerhouse recently took on a new role as the new CIO of Infrastructure at a global bank. She also just announced the release of her new book Grit & Grind, which gives you a simple 10-part practice for building bone-deep confidence in your own abilities.

Clearly, not only does Rhonda love to use her talents in many ways, but she’s also passionate about her career, her team and inspiring women throughout the world with her energy, drive and expertise. Thank you, Rhonda, for empowering us to run that extra mile and never give up.

When TIME magazine published a list of the 20 most influential business geniuses of the 20th century, Estée Lauder was the only woman to make the cut. I’ll leave you today with one of her most inspiring quotes:

“Projecting your mind into a successful situation is the most powerful means to achieve goals.”